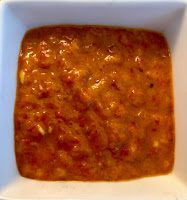 I ordered a number of things from Costco and had them delivered. The only problem is that you get so much of everything. I had way too many Red Peppers so I decided to make a Red Pepper Spread called Ajvar. I often buy this in a jar and it frequently also has Eggplant in it too. Ajvar is a fairly mild condiment that's wonderful on Crackers. I usually serve it with Rice Crackers. It's quite simple to make and only requires the you roast the Peppers first and then puree them with Olive Oil, Garlic, Vinegar, Salt and a little bit of Red Pepper if you like heat. I think you will really enjoy Ajvar!

Using a small, serrated knife, peel off the skin of the Peppers and discard. Place the Roasted Peppers in a food processor or blender and add in the remaining Olive Oil, Garlic, White Vinegar, Red Pepper flakes and Eggplant (if using) and Salt. Puree until mostly smooth.  Pour into a bowl and serve with Crackers.

Red Peppers belong to the Fire Element because of the color and also because they look like Hearts. The Red Pepper, if you use it adds even more Fire. The Olive Oil and Vinegar both contribute the Wood Element. The Garlic brings in the Metal Element and the Rice Crackers I served them with adds even more. The Water Element is present if you use the Eggplant and the Earth Element shows up if you use Almond Crackers (Simply Mills) like I did. Then this becomes a balanced snack. Otherwise, serve a Water and Earth food at a later meal.