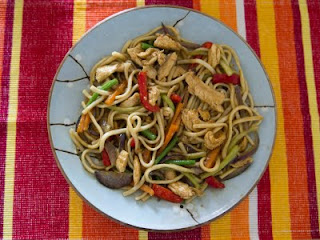 Life is crazy for me lately as I have been moving out of my house and staying at my son's apartment in the meantime. And when I get stressed, I go for comfort foods, which for me means the food of my childhood. I mostly ate Chinese food and one of my perennial favorites is fried noodles of any kind. Some days I am partial to pan fried noodles that are crispy to soak up the sauce, but that's for another day. Today, I wanted chewier, softer noodles that are stir fried with vegetables and just a bit of meat - chicken is my favorite. It can also easily become vegetarian if you leave out the meat and oyster sauce and use more soy sauce and a little bit of toasted sesame oil.

Lo Mein is really quite easy to make and as with all Chinese food, the cutting and prepping of the ingredients takes the longest time. Cooking itself is actually really fast and you can do it ahead of time. For Lo Mein, you can use any kind of meat and any kind of vegetables. It's always easier to slice the meat if it is partially frozen. Remember to slice everything just about the same size. I had a large boneless chicken breast, some red pepper, a carrot, some dried Shitake mushrooms and green and yellow onions. As you can see, it turns out to be a colorful dish, which implies a five element balance and the ratio of meat to vegetables makes it a wonderful light summer meal.

Heat a wok (I prefer a flat bottomed wok or you can use a large frying pan) on high heat and add in 2 Tablespoons of oil and heat until a drop of water sizzles. Put in onion pieces and red pepper slices. Stir fry until softened slightly and then add in chicken. Cook chicken without stirring until slightly browned and then turn and stir fry. Then add in pea pods, carrots and mushrooms (and any other vegetable you are using). Stir fry until all vegetables are hot and remove to a platter. (This will not take very long).

Add an additional 1 Tablespoon oil to the wok. Heat until a drop of water sizzles. Put in noodles and stir fry for about 1 - 2 minutes. Add in chicken and vegetable mixture. Pour in sauce mixture over the top and stir fry to coat everything evenly. Add in green onion shreds and remove to a serving platter.

Since this is a one dish meal composed of a protein, carbohydrates and vegetables, so you can be pretty sure that it has an intrinsic balance. But to break it down: the wheat noodles add the Wood Element and so do the chicken and pea pods. The carrot adds the Earth Element. The Shitake Mushrooms, soy sauce and oyster sauce contribute the Water Element. The Shaoshing Rice Wine and Red Pepper bring in the Fire Element and the yellow and green onions cover the Metal Element. So you can see, this is a very balanced meal indeed. 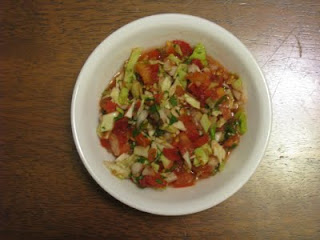 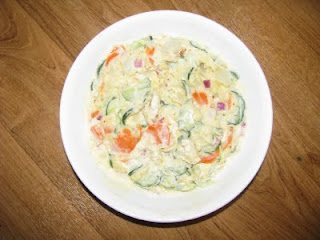 I have a thing for potato salad and also for cucumbers so what could be better than a potato salad that includes both of them? I recently bought a container of Japanese Kewpie Mayonnaise (ranked as one of the top 100 foods in last year's Saveur Magazine) and needed to use it. I wasn't in the mood to make Sushi as this brand of mayonnaise mixed with either chili oil or Sriracha makes the best spicy tuna sauce. So, I decided to replicate the Japanese Potato Salad that I sometimes get in restaurants. I called a Japanese friend and asked her how to make it, but like many good home cooks, her response included phrases like - "you add in enough Kewpie mayonnaise to make it moist." However, I did discover the secrets of Japanese Potato Salad. First, the potatoes need to be cooked until they can be easily mashed and the thinly sliced onions and cucumbers need to be presalted and drained. The carrot, that adds such pretty color, needs to be boiled and sliced and the dressing is simply Kewpie Mayonnaise, salt, pepper and a bit of sugar. We served it with Terriyaki Baked Chicken. It was so good that I had to make a second batch as my son and his girlfriend and I devoured it in one sitting! The contrast of the cucumbers to the mashed potatoes was wonderful. Just for the record, the second batch, which got to sit in the fridge over night was probably even better, but it's unlikely that we will wait that long. So, if you like potato salad, you need to try this recipe!

2 large Russet Potatoes or 4 regular potatoes, washed with peels left on
1 Japanese Cucumber or 2 pickling cucumbers or 1/3 of a large hothouse cucumber thinly sliced - cut pieces in half if the cucumber is very fat
1/3 cup of thinly sliced red onion (cut into small pieces about the same length as cucumbers)
1 carrot, peeled and left whole
1 cup of Kewpie Mayonnaise (can also used Best Foods or Hellman's)
1 1/2 teaspoon Salt - 1/2 teaspoon for salting cucumbers and onions, 1 teaspoon for salad
1/4 teaspoon of Pepper
1/2 - 3/4 teaspoon of sugar to taste, depending on kind of mayonnaise

In a large pot, put in potatoes and cover with water about 1" over the potatoes. Bring to a boil and add carrot - cook carrot for about 15 minutes and remove. Cut into thin rings. Continue to cook potatoes until they can be pieced easily with a fork (this takes less time with smaller potatoes - about 20 - 30 minutes or up to 45 minutes for larger potatoes). Meanwhile, put cucumbers and onion into a small bowl and sprinkle with 1/2 teaspoon of salt. Leave until potatoes are done.

When potatoes are done, drain water, peel potatoes and cut into a very small dice. Put in a large bowl. Squeeze juice out of cucumbers and onions and rinse with a little fresh water and drain. Put them in with the potatoes and add carrots. In another small bowl, mix together mayonnaise, salt, pepper and sugar. Taste and adjust seasoning if necessary. Mix in with potato mixture and stir. It is okay if the potato mashes, that is part of the texture of this kind of potato salad. Smooth top and place in refrigerator and chill until cold.

Potatoes are very Earthy so Potato Salad is clearly an Earth Food. The carrot enhances that and so does the cucumber. The mayonnaise and red onion bring in the Metal Element. This dish therefore needs to be served with other dishes. We added a spicy Terriyaki Chicken which added the Water Element from the soy sauce, the Fire Element from the Red Chilis and the Wood Element from the chicken. Then, this became a balanced meal.

Posted by Lillian at 9:26 AM No comments: