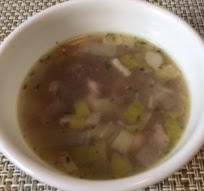 Cock=A=Leekie is a Scottish Soup made of Leeks and Chicken (traditionally an old Rooster), Bacon and either Rice or Barley. I used Rice to keep it Gluten Free. And, instead of cooking a whole chicken, I made it quick by using Chicken Broth and cut up Chicken Breast. It is believed that the original recipe for this soup came from France and used Onions, but the Scots substituted the more available leeks.

Cock-A-Leekie is a soup with a lovely combination of flavors and is always served on St. Andrew's Day, which is November 30th.  I'm a little early for that celebration, but it's delicious any time.  And, since my son is living in St. Andrew's, it makes me think of him when I make it. There are two secret ingredients - one is a splash of white wine, which makes it a more sophisticated soup and the other is sliced rehydrated Prunes which adds a sweet note. With so many soups in the world, this one is relatively unknown and it's definitely one I love to make!

Wash the Leek pieces in a colander and shake to dry.  In a soup pot, melt the Butter and add in the Bacon pieces.  Cook until the Bacon is no longer pink, but no crispy.  Add in the Leeks and cook, stirring until the Leeks soften. Add in the Wine and then the Chicken Broth and add in the Thyme and Bay Leaf. Bring to a boil and reduce heat. Simmer for 15 minutes. Then add in the cut up Chicken, the Parsley the Rice and the Prunes if using.Turn heat up and bring back to a boil and then reduce to a simmer, cooking for an additional 15 minutes. Serve immediately. If making ahead, cook only for the first 15 minutes. Cool and refrigerate. When ready to use, reheat to boiling and then add in the Chicken, Rice, Parsley and Prunes..Sprinkle with Black Pepper to serve.

Soup is part of the Water Element and the Bacon adds even more Water.  The Chicken and Chicken Broth contribute the Wood Element. The Fire Element is represented by the Wine the Prunes and the Black Pepper. The Leeks, Rice, Bay Leaf, Thyme and Parsley bring in the Metal Element.  Only the Earth Element is missing so be sure to serve dessert!

Posted by Lillian at 1:10 PM No comments: 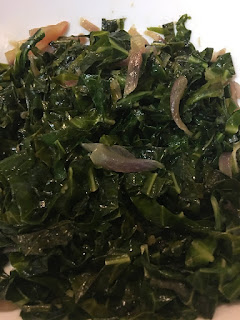 Well I certainly meant to post sooner but iI was in Europe and I'm sorry to say that most of the hotels I was staying at had very poor internet service so I decided until I got home and recovered from jet lag. Before I left, I made a lovely Pork Tenderloin Roast and I was cleaning out my fridge before leaving, I cooked every vegetable that was in there. I had a bunch of Collard Greens that I was going to make into soup but I sautéed it instead and made it wonderfully tart with lemon. It was so delicious!  It's a great side to serve with a fatty meat, like Pork and it was my favorite side. Like most vegetables, you don't have to do much to make it delicious. A quick sauté with Red Onions, a pinch of salt and sugar, a small amount of Chicken Broth and a squeeze of a fresh Lemon. That's it and it is wonderful. I will be making this version of Collard Greens more often!

Pull the leaf part of the Collard Greens off of the stems. Roll up each leaf and slice (Chiffonade) finely into ribbons. Cut in half lengthwise if they are too long to manage

n a large frying pan, heat the Oil and add the Red Onions. Cook until they become soft.  Add in the Collard Greens and sauté until soft. Sprinkle with the Salt and Sugar and add in the Chicken Broth. Cook, stirring until the Chicken Broth is mostly absorbed and sprinkle on the Lemon Juice. Serve immediately.

As a leafy green. Collards belong to the Wood Element and the Chicken Broth and Lemon Juice adds even more  The only other major ingredient is the Red Onions which contribute the Metal Element so this is a good dish to serve with Pork or Fish, which are Water Foods. The meal should also have some Earth and Fire foods to create a balanced meal.

Posted by Lillian at 7:37 AM No comments: 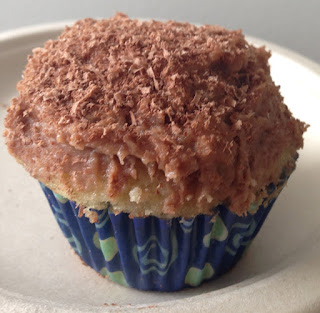 I’ve been meaning to post more recipes for several weeks now, but life just got incredibly busy. I now have a backlog of recipes to start posting and today I will begin with the sweetest!

When I was a child, I rarely ate cake since I have a Chinese Mother and she didn’t like sweets. I remember her trying to bake cakes with recipes from her neighborhood friends but she never used frosting because she thought it was way too sweet.  I grew up thinking that cake was supposed to be served without frosting and my friend’s birthday cakes were strange with all that frosting on top.  That kind of frosting from a can made my teeth hurt!  That was before I had frosting made from scratch.  Whipped Cream frosting is still my favorite but a homemade Buttercream Frosting is really good too.

Last month, it was my friend Kelly’s birthday and it occurred on the day of a class. So I made cupcakes for us all. I knew that her Mom used to make Yellow Cake with Chocolate frosting. I also know that her favorite kind of chocolate is Milk Chocolate so I made cupcakes from Gluten Free mix for Yellow Cake and surprised her with Milk Chocolate Buttercream Frosting.  It was delicious. And to satisfy the Dark Chocolate lovers, I grated Dark Chocolate over the frosted Cupcakes. I like to lightly frost cupcakes so there was plenty left to spoon into a bowl for those frosting lovers who spread it on the bottom half of their cupcakes. This recipe was a winner with Kelly and me!

Place a heatproof bowl over a small pan of boiling water. Add in the Chocolate and stir with a spatula until melted.  Remove and set aside.

In a stand mixer or a large bowl with a hand mixer, put in the softened Butter and Powdered Sugar. Mix until light and fluffy.  Then add in the melted Chocolate, Whipping Cream and Vanilla Extract.  Mix until thoroughly combined. Use immediately or refrigerate and bring back to room temperature to frost cupcakes.

Once frosted, use a microplane grater and grate the Dark Chocolate on top of the frosted cupcakes.

This is a very sweet dessert topping so you know that it belongs to the Earth Element and the Powdered Sugar and Milk Chocolate are the Earthy ingredients although the Chocolate also contributes some Fire.  The Butter, Whipped Cream and Vanilla Extract all belong to the Metal Element.  The Gluten Free Cake mix is primarily made of Rice Flour, which is also Metallic.  So be sure to serve these cupcakes after a meal that is composed of some Water and Wood foods and some Fire foods too.

Posted by Lillian at 1:04 PM No comments: