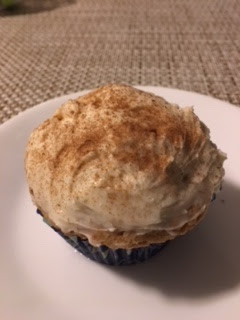 I was in the mood for something sweet yesterday afternoon - it was around tea time and i didn't have much in the house that was already made - no Gluten Free cookies or cakes to be found. So, I just had to make something. I decided to make Carrot Cupcakes as it least it has the perception that it is just a bit healthier since it contains a vegetable!  I also wanted to bake a cupcake that didn't use almond flour for a change so I went with a recipe from Serious Eats (a great food website by the way) and made only enough for 12 cupcakes and frosted it with my own version of Cream Cheese frosting because nothing goes better with Carrot Cake than Cream Cheese frosting. I plan on using this same recipe for Zucchini Muffins as well. Carrot Cake is one of those foods that I am willing to take a Lactaid pill for!  Anyway, the Cupcakes turned out wonderfully. They were light and fluffy and delicious. I ate two and I'm going to have another one (or two) for tea time today!

Turn oven to 350 degrees. Line a muffin pan with paper.

Mix together the Gluten Free Flour with the Baking Powder, Baking Soda, Salt and Cinnamon in a bowl.

In a stand mixer or a bowl with a hand mixer, mix together the Sugar, Oil, Vanilla Extract and Eggs until fluffy, about 2 minutes. Add in the Flour Mixture and mix to combine about another minute. Then add in the Carrot and Walnuts by hand with a spatula.

Spoon into the cupcake tin and bake for 25 - 30 minutes or until the top is lightly browned.  Cool and then frost.

Cream together until thoroughly blended. Use to frost cooled cupcakes.

As a sweet dessert, you know automatically that this is part of the Earth Element, but it is even more Earthy as one of the main ingredients is Carrots. The Gluten Free Flour mix is made mostly of Rice Flour which contributes the Metal Element as does the Cream Cheese and Cinnamon and Vanilla Extract. The Walnuts and Eggs bring in the Water Element. Be sure to eat these with some Tea or Coffee to bring in the Fire Element. And either before or after, make sure you have some Wood foods to create balance. 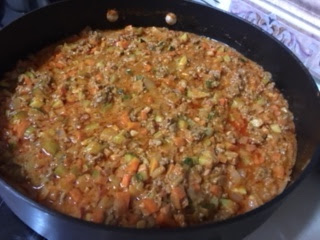 I recently talked to an Italian friend from Bologna about what was considered authentic Bolognese Sauce. She gave me the recipe from the Accademia Italian della Cucina. It has very specific instructions about what to use and what was most surprising was the use of only a small amount of triple concentrated Tomato Paste.  The other "authentic ingredients" included Pancetta, Ground Beef, Onions, Carrots, Celery along with Whole Milk/Cream and White Wine. You will notice that there is no Garlic and no herbs in the ingredient list. This is actually considered a Meat Based Sauce not a Tomato Based Sauce.

The only ingredient that was hard to find was the triple concentrated Tomato Paste.  I used to have some that I brought back from Italy but I didn't want to wait to try to order some online. So I used regular Tomato Paste and the amount called for just wasn't enough Tomato flavor for me so I used 1/3 cup instead of just just 2 ounces. If you like a more pronounced Tomato flavor use the whole 8 oz can.

This was the best version of Bolognese I have had outside of a restaurant. I served it with La Venzian Gluten Free Fettucine and it was so delicious and so much more authentic!

Fry the Pancetta gently in the Olive Oil until it starts to release it’s fat - be careful not to burn. Add the vegetables and cook until the onions soften and become more transparent, stirring often. Add the Beef and cook until no longer pink.  Add the Tomato Puree and the Wine, mix well. Add the milk a little at a time until it is fully incorporated, stirring often.
Season with Salt and Pepper and cook on a low heat for 1 hour.  If it starts to dry out, add a little more Milk or Beef Broth.

Serve with Fettucine or Tagliatelle Pasta.

Beef belongs to the Earth Element as do Carrots so this is a primarily Earthy dish.The pasta made from Corn adds even more of the Earth Element. The Pancetta contributes the Water Element and the Tomato Paste and White Wine both bring in the Fire Element.  The Wood Element is represented by the Celery and Olive Oil, whereas the Onion, Butter and Milk make sure the Metal Element is present too. This ends up being a balanced meal all by itself and anything else you serve is extra!
Posted by Lillian at 12:33 PM No comments: 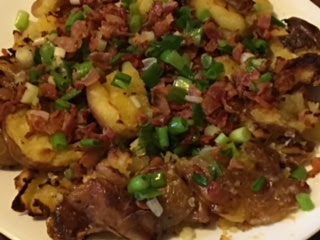 I heard about Smashed Potatoes a while ago and finally got on the bandwagon and I'm sure glad I did.  When you cook Potatoes this way, you get the soft goodness of the inside of a Baked Potato with the delightful crunchy bits of a Roasted Potato. Topped with Butter, Bacon Bits and barely cooked Green Onion, it was divine!  My daughter-in-law also topped hers with some Sour Cream and was delighted with this dish too. I used small Red Potatoes that I boiled for just 20 minutes before smashing them and finishing them off in a hot oven.  This is going to become a family favorite and if you haven't made Potatoes, this way, I encourage you to try this recipe right away!

Place Potatoes in a medium pot and cover with Water. Bring to a boil, reduce heat and cook for about 20 minutes or until a fork can be inserted easily into a Potato. Drain and reserve.

Drizzle Oil over a sheet pan. Place Potatoes on the sheet pan and smash using a potato masher until the Potatoes are about 1/2" thick.  Drizzle the melted Butter over the Potatoes and then sprinkle with Sea Salt.

Place in the oven and cook for 25 minutes. Sprinkle the Bacon and Green Onion pieces on top of the Potato and cook for an additional 5 minutes.  Serve with Sour Cream if desired.

Potatoes belong to the Earth Element. The Green Onions and Butter contribute the Metal Element and the Bacon brings in the Water Element. The Wood and Fire Elements are missing so this would be a great side with Chicken (for Wood( and a salad (for Fire) or Lamb for Fire and green vegetables for wood or any Wood or Fire vegetarian options that create balance.

Posted by Lillian at 5:28 PM No comments: 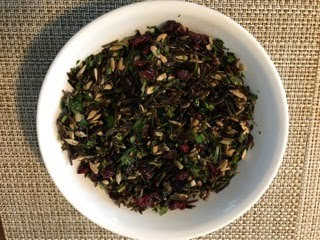 I bought a lot of Wild Rice last year at a discount food warehouse and it's just been sitting in one of my glass canisters on the kitchen counter just begging me to cook it. Wild Rice is a true rice by the way, it is the seed of an aquatic plant.  When cooked, it has a slightly nutty flavor and is a bit chewy. The good news is that it is also gluten free.  So, I finally grabbed some and made a Wild Rice Salad.   was in the mood for something a little sweet and a little tangy so I used a Balsamic Dressing with dried Cranberries along with chopped Parsley, some Green Onion tops and toasted Sunflower Seeds. It was amazing!  And, like may grain salads, it tastes even better the next day!

Heat the Water in a pot and bring to a boil. Add the Wild Rice, reduce the temperature and simmer for 45 minutes. Drain and let cool slightly

In a large bowl, mix together Parsley, Green Onions, Cranberries, Balsamic Vinegar, Olive Oil, Salt and Sugar. Stir to combine and add in the Wild Rice. Toss and let sit for at least 15 minutes or refrigerate.  Add in Sunflower Seeds just before serving.

Wild Rice is considered a Water food and the Sunflower Seeds add even more of this element.  The Parsley adds some of the Wood Element as well as some Metal. The Wood Element is further enhanced by the Balsamic Vinegar and Olive Oil. The Cranberries bring in the Fire Element and the Metal Element is also represented by the Green Onions. Only the Earth Element is deficient as the sweetness of the Sugar and in the Balsamic vinegar is very little Earth, so be sure to serve this wonderful Salad in a meal with that Element involved like Root Vegetables, Squash or Beef. 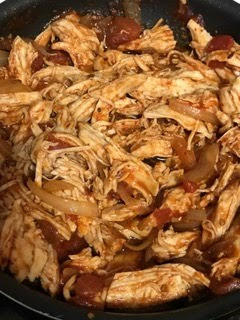 I was in the mood for tacos the other day and decided to make a quick version of Chicken Tinga as the filling. This is a dish of Shredded Chicken wrapped in a sauce of Tomatoes and Chipotle Chiles. I like to make it myself so that it's not too spicy. It's very fast to make. You cook the sauce while you are poaching the chicken and then blend them together for just a little while longer. It's also so simple - all that's required is boneless, skinless Chicken Breasts, Canned Tomatoes and canned Chipotle Chiles in Adobo Sauce. I added some onion slices for some texture. I cooked the Chicken Breasts in some Chicken Broth to give it a bit more flavor.  I served it in small steamed corn tortillas topped with a bit of Cilantro  Chicken TInga is  such a delicious taco filling!

2 Boneless Skinless Chicken Breasts, cut in half across the middle
4 cups Chicken Broth or Water
1 Tablespoon Oil
1 medium Onion, sliced thin
1 can of Chopped Tomatoes
1 teaspoon of Sugar
1 teaspoon of Salt
1/2 can up to 1 whole can ( 7 ox)  of Chipotle in Adobo Sauce, chopped

in a medium pot, pour in Chicken Broth and add in the Chicken Breast pieces. Bring to a boil and then turn down heat to a simmer and oook for 25 minutes.

Meanwhile, heat the Oil in a frying pan. Add in the Onion and cook until soft. Then add in the Chipotle Chiles and the Adobo Sauce along with the Tomatoes.  Season with Salt and Sugar. Taste and adjust as desired. Cook for 5 minutes on Medium Heat to blend the flavors. Turn off until the Chicken is done.

When the Chicken is done, remove it from the Broth onto a cutting board and let cool slightly. Then, using two forks, scrape of shreds of each piece until all the Chicken is shredded.

Add the Chicken into the Tinga Sauce and toss to coat. Heat for an additional 10 minutes or until hot and bubbling. Use for Tacos, Burritos or Quesadillas..

Chicken belongs to the Wood Element. The Tomatoes and Chpotle Chiles contribute the Fire Element and the Onion makes sure that the Metal Element is also present.  Both Water and Earth are missing but using Corn Tortillas for tacos adds in the Earth Element and Beans served on the side make sure the Water Element is also included in a balanced Five Element meal.