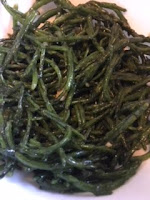 The first time I tried Samphire was when I was walking by the sea when I lived in California. It was early summer and my friend bent down and plucked a piece and told me to eat it. I thought it was ice pant. I was amazed that it was salty and delightfully crunchy! We gathered a bunch of tips and went home and made a lovely salad dressed with Olive Oil and Meyer Lemon Juice. I didn't eat Samphire again for many years until I visited friends in England, where it is much more commonly eaten. Just last week, I found it in my local grocery store going by the name of Sea Beans. I bought a bagful and used it several different ways. My favorite was a salad using the Asian flavors of Rice Vinegar, Sesame Oil, Garlic, just a hint of Low Sodium Tamari and a little extra Sugar to balance out it's natural saltiness. I think Samphire tastes better blanched or about 10 seconds to help release a bit of the salt. I found out that it really is a succulent, which is why it is so juicy. It is so delicious that I recommend you try it if you haven't already!

Place Samphire in a bowl and cover with boiling water for 10 seconds. Drain and rinse with cold water. Place back in the bowl.  In another bowl, mix together the Vinegar, Sesame Oil, Vegetable Oil, Tamari, Garlic and Sugar. Stir to combine and pour over the Samphire. Toss to coat and serve immediately or refrigerate to serve later.

Samphire, being so salty must somehow belong partially to the Water Element and partially to the Wood Element.  The Tamari and Sesame Oil add more Water and the Vinegar adds more Wood. The Garlic contributes a little bit of the Metal Element and the Sugar in the Seasoned Vinegar and added in bring in a bit of the Earth Element too.  The Fire Element is not present so this would be a good side salad for a meal that has more Metal, Earth and Fire foods. 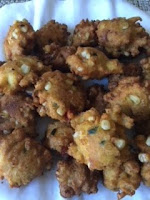 When I was 10, I went to go and visit my relatives in Virginia. One of the highlights of the trip was fishing in the Shenandoah River. The fish were biting and so easy to catch that my sister caught one with a safety pin!  I was a bit squeamish at seeing them cooked so I ate mostly Hush Puppies at that meal and developed a love of that homely side dish that accompanied the fried fish.

As the story goes, cooks would use the leftover cornmeal from coating the fish to make them, adding in Buttermilk, Baking Soda and Egg and deep frying them. They were said to have once been thrown by a cook in Louisiana to a howling puppy and that is how they got their name since it shushed him up.

It's been awhile since I made them and now that I am gluten free, I needed to adapt the recipe. I made them tonight without any Fish and I added Clams, Red Pepper and Green Onion, which I think makes them into Fritters and gives them more color. For the batter, I used a combination of mostly Cornmeal with a bit of Gluten Free Flour to make them more tender and I used the Clam Broth instead of Buttermilk and used Baking Powder instead of Baking Soda because there's nothing acidic in this batter once you take out the Buttermilk. I fried them up and just couldn't stop eating them. I got the thumbs up from my son and daughter in law too. This would be a wonderful appetizer for a party and I am quite sure you could make them ahead and then put them in the oven to warm up.  Sometimes, good old fashioned Southern Cooking is hard to beat!

Drain the Clams and reserve the Broth - it should measure a scant 1 cup of Broth.

Heat oil in on medium high heat a wok or deep fryer to a depth of at least two inches. Put paper towels on a plate for the Fritters.

In a mixing bowl, combine the Cornmeal, the Gluten Free Flour, the Baking Powder, Salt and Pepper. Stir to blend. Then add in the Clams, Corn. Green Onions, Red Pepper, the reserved Clam Broth and Egg. Stir to combine.

Drop by the heaping teaspoonful into hot oil. Stand back and use a splatter guard if you have one as the oil might pop. Cook until golden brown, turn carefully using a spider or slotted spatula and remove when deep golden brown.  Continue until all the batter is used up.  Serve hot with Ketchup, Salsa or Tomato Chutney.

As a fried food, these Fritters already have some of the Fire Element and the Red Pepper adds even more. The Cornmeal and Corn bring in the Earth Element. The Metal Element is found in the Gluten Free Flour, which is mostly made of Rice and the Green Onions contribute too. The Water Element is found in the Clams and Clam Broth, making this a balanced little snack! 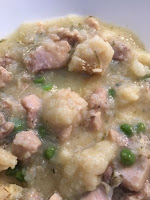 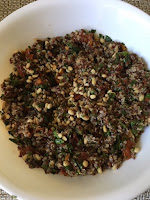 While teaching in England, I made dinner most nights rather than go out to eat and I always kept in mind that I wanted to cook things that would also be good for lunch the next day. The one dish that stood out to me was the Quinoa Salad I made with Sun Dried Tomato, Parsley and Green Onion tops. It had a light Balsamic Vinegar and Olive Oil Dressing and it was even more delicious the next day!  It's easy to make and I think it would be the perfect dish to bring to a potluck. I'm going to be making this dish again and again.

Rinse Quinoa and drain. Then add to a small pot and add the 1 1/2 cups of Water and 1/2 teaspoon of Salt. Bring to a boil, reduce heat and cover for 20 minutes.  Remove from heat and let cool for about 30 minutes.

In a serving bowl, add the Sun Dried Tomatoes, Parsley, Green Onion, 1/2 cup of the Pine Nuts and the Quinoa. In a small bowl, mix together the Balsamic Vinegar, Olive Oil, Salt and Sugar. Pour over and toss to combine. Sprinkle with the remaining 1/4 cup of Pine Nuts and serve. Can be refrigerated and served the next day.

Quinoa as a seed belongs to the Water Element and Pine Nuts add even more. Balsamic Vinegar and Olive Oil both bring in the Wood Element. The Sun Dried Tomatoes contribute the Fire Element and the Parsley and Green Onions are part of the Metal Element. Only a hint of the Earth Element is present so be sure to serve this with an Earthy meat like Beef or with another dish, like Squash or a sweet dessert to create a balanced Five Element meal.

Posted by Lillian at 7:51 PM No comments: 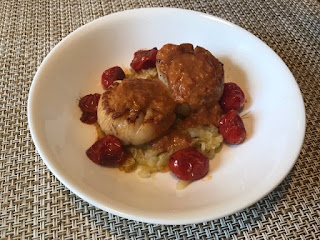 I've been traveling the past several; weeks and I couldn't access this blog as I forgot to bring my password so I didn't get to post - I was locked out!  So now that I am home, I am behind  on posting as I did cook in England at the Airbnb and have several new recipes for you the next few days. Here's the first one that I think some of you might really want to make as it was so good!

I cooked this the night before I left, splurging on some great big Scallops and making a divine Charred Tomato Sauce. Scallops are one of the easiest foods to cook and only require that you don't turn them until they are fully browned.

Heat a cast iron skillet and add the Vegetable Oil.  Place Scallops in the pan and cook, without touching until the bottoms are browned. Turn over and brown the other side.  Remove to a plate.

In a non-stick frying pan, melt the Butter and add in the Fennel slices. Sprinkle with Salt and sauté until the fennel softens and begins to turn a light golden brown.

Place the Fennel in the center of a serving plate. Place Scallops on top and the reserved Charred Tomatoes around the outside edge. Spoon the Charred Tomato Sauce over the top and serve.

Scallops are a food from the Water Element.  Charred Tomatoes contribute the Fire Element, especially the way they are cooked. The Wine adds even more Fire. Fennel is one of the few Metal vegetables and the Shallots and Butter bringing in even more Metal. The bit of Olive Oil gives just a hint of the Wood Element so a Kale Salad or a green vegetable would be a good addition. And of course, don't forget the Earth Element which is easily added as a dessert for Five Element balance!

Posted by Lillian at 9:20 AM No comments: