Risotto with Mushrooms and Peas 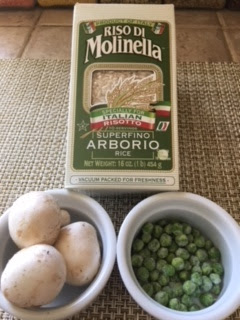 There are times when I crave a certain food and while I know I can go to a local restaurant to order it, I decide that I'd much rather make it myself. Mostly, because then I know exactly what's in it. In the case of Risotto, I know that it has Parmesan Cheese in it, which is one of the reasons why it is so delicious, but by making it myself I know how much is in it and that makes a difference for me. I use only a small amount.

Risotto has a reputation for being hard to make, which is not true. It is actually really easy, but it does take time and you do have stay there and stir. I consider it an exercise in mindfulness and I find it very calming. And, the end result is so creamy and savory and good that it is worth the wait!

Rice, Parmesan Cheese and Butter along with the Shallots makes this a very Metal food. But the White Wine adds some Fire and the Chicken Broth and Peas bring in the Wood Element. The Earth Element is represented but the Mushrooms So, be sure to serve this in a meal that contains at least one dish made up of a Water food.

Posted by Lillian at 2:42 PM No comments: 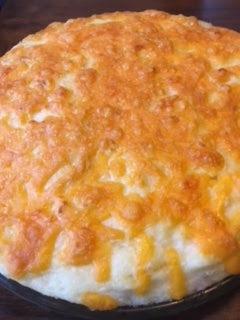 I have a peculiar love of meat in gravy with mashed potatoes. I think it goes back to my primary school days where the only thing I really liked from the school cafeteria was ground beef in gravy served over mashed potatoes. I would buy lunch every time they served it. The rest of the time I packed a lunch. You have to remember that at home until I started cooking, I almost always ate Chinese. So, one of the firsts things I made when I started cooking was - you guessed it - ground beef in gravy!  I still love that combination but since discovering that I can't do any gluten, it was quite discouraging as I never liked gravy made with cornstarch. The revelation that Sticky Rice Flour (Mochi) made gravy taste like real gravy was huge! Now, I like it even better than the original and has allowed me to make all kinds of things that I thought would be memories.  Last night, I made Shepherd's Pie.

Now I can't claim that this is an authentic version, but it was very satisfying and very tasty!  If anyone out there doesn't know what this is, it is basically ground meat, usually lamb cooked in a gravy with onions, carrots and peas and a mashed potato topping. I like ground beef better and I also like to add mushrooms. To make it pretty, I sprinkled Cheddar Cheese  on top for my daughter in law who loves Cheese and just scraped mine off.  I also made the Mashed Potatoes with whipping cream as the potatoes should taste rich and creamy. If I was making this for a vegetarian friend, I would probably use all Mushrooms instead of meat and use Vegetable Broth. Shepherd's Pie is comfort food at it's best and made me very happy. It's also good made ahead, refrigerated and popped in the oven later. But don't freeze it, as mashed potatoes don't do well in the freezer. Like always, I tend to mush the mashed potatoes into the meat mixture and loved it!

In a large saute pan, melt the Butter and add in Mushrooms, Onions and Carrots. Cook until Onions are softened. Then add in the ground meat and Seasoned Salt and cook until it is no longer pink.  Add in the frozen peas and sprinkle the Rice Flour over and stir to mix in. Pour int eh Beef Broth and add the Worcestershire Sauce and Tamari. Cook until thickened - about 5 minutes.  Pour into a deep dish pie pan.

Put the Potato chunks into a pot and cover with water. Bring to a boil, reduce heat and simmer for about 20 minutes or until Potatoes are fork tender.  Drain off water and mash them. Then add in the Butter, Cream and Salt.

Spoon dollops of mashed Potato over the meat mixture and smooth to make a kind of frosting. Sprinkle with Cheddar Cheese and place in the oven on top of a Sheet Pan in case it bubbles over. Cook for 30 minutes.

The Elemental makeup of this dish changes based on the kind of meat you use. Lamb is considered a Fire Meat, whereas Beef is part of the Earth Element.  The Mashed Potatoes, Mushrooms and Carrots and Beef Broth are all Earthy, whereas the Peas are part of the Wood Element. The Metal Element is represented by the Butter, Cream and Onion. Only the Water Element is lacking a strong presence, except for the Salt so be sure to serve a Watery food with it.

Posted by Lillian at 4:18 PM No comments: