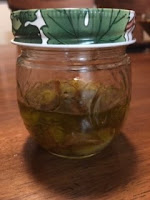 I'm leaving home to teach for two weeks and I've been trying to use up things that that are perishable and won't be used by my son while I'm gone. Recently, I went a splurge and bought a lot of Garlic. Chances are it will stay good while I'm gone, but some of them looked like they might sprout, so I made Garlic Confit. That's just a really fancy name for Roasting Garlic in Olive Oil. You simply cover Garlic Cloves with Olive Oil to cover and then roast it low and slow. I did cut the largest Garlic Cloves in half to remove the Green piece of new Garlic that was growing, as that makes the Garlic bitter.

Once the Garlic is roasted in the Olive Oil until soft and browned, it can be used in any number of ways and the remaining Olive Oil is full of Garlic flavor and wonderful for stir-frying. It's also so simple to make Garlic Confit, I don't know why I don't do it more often!  Personally, I love to mash Roasted Garlic up and add it with the Oil to Salad Dressings and I also use both the Garlic and Garlic Oil in pasta dishes. My son loves it on a toasted Baguette, with some of the Olive Oil and a sprinkling of Maldon Sea Salt - it's  so delicious. So, I know he'll eat it cup while I'm away!

Heat the oven to 250 degrees

Place Garlic Cloves in a heat proof baking dish and just cover with Olive Oil. Cook for 1 hour or until the Garlic Cloves are golden brown and soft. Remove from the oven and put into a jar and keep in the refrigerator.

Posted by Lillian at 5:57 PM No comments: 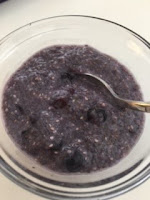 I'm always looking for different things to have for breakfast so I decided to make a Blueberry Chia Pudding. Chia Seeds are very good for you, particularly for your digestion and they are loaded with nutrients with  very few calories. I used Almond Milk to keep it Lactose Free and I cooked frozen blueberries with a little Sugar to make a sauce to stir in. It was so good that I am sharing it with you!  You could easily make this a dessert instead of a breakfast dish.

In a mixing bowl, mix together the Almond Milk and Chia Seeds. Put aside.
Put Sugar and Hot Water in the bottom of a small pot and stir to dissolve slightly. Add the Blueberries and turn the heat to medium.  Cook until some of the Blueberries start to burst and make a sauce - you can push down on some of the Blueberries with you spatula to help this process along. Cook for about 3 minutes.  Add to the Chia mixture and stir in thoroughly.  Refrigerate for at least 20 minutes up to overnight.

Blueberries are a Water Fruit and Chia Seeds belong to the Water Element as well. So this is a great dish to support your Kidneys. Almond Milk is a Metal Beverage with some of the Earth Element from the Almonds as well and the Sugar adds just a bit more Earth. The Fire Element is missing, which can easily be added with Coffee or Tea and the Wood Element also needs representation so I served my pudding with Chicken Breakfast Sausages to make a balanced breakfast! 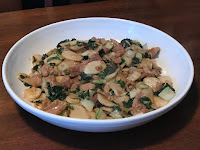 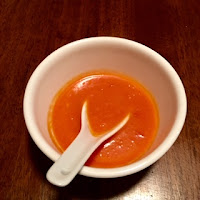 I was craving a bowl of creamy Tomato Soup but I didn't want to use any dairy. So I decided to create a Tomato Soup using Coconut Milk and adding some Thai flavors  I might add that I keep Lemongrass in the freezer, so if you don't have any, you can use a bit Lime or Lemon Zest. I pureed it with a stick blender and served it with a squeeze of Lime. It was so good that I couldn't stop eating it!

Put the Oil into a medium saucepan and heat. Add the Shallots and cook until they soften.  Then add the Tomatoes, Coconut Milk, Lemongrass, Salt and Sugar. Stir to combine and bring to a boil. Reduce heat and simmer for 10 minutes.

Then use a stick blender or a blender  to puree the soup. Serve with a squeeze of Lime.

Soup is always part of the Water Element so that Element is covered. The Tomatoes bring in the Fire Element. The Coconut Milk represents both the the Metal Element and the Earth Element since it is naturally sweet. The Lime and Lemongrass, which is Woody herb, contribute the Wood Element. This soup is more balanced than I expected!

Posted by Lillian at 9:52 PM No comments: 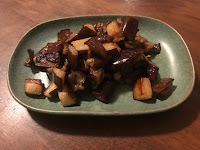 My daughter in law loves Eggplant and she loves Sriracha Chili Sauce. So, I decided to combine those two things in a simple side dish when she was over for dinner the other night. I roasted the Eggplant until it was crisp at the edges and tossed it with a Sriracha Butter Sauce. It was so wonderful that I had to post it (so I could remember it and they could access it.)

Roasting Eggplant is one of my favorite ways to cook it as it absorbs less oil. And it's a wonderful, mostly hands off cooking method that is helpful when you are also cooking other things. I used long and slender Japanese Eggplant as they are not as bitter. I cut them up into chuck and tossed them in the oven with only a little oil. Once they were roasted, I dressed with them a simple sauce of melted Butter combined with Tamari and Sriracha. It was so good and I wish I had made twice as much!

Heat the oven to 425 degrees. Drizzle the Oil over a sheet pan and add the Eggplant. Toss with your hands to coat them lightly. Sprinkle with the Salt and place in the Oven. Cook for about 15 minutes and then turn the Eggplant. Continue cooking for another 10 mintues or until the Eggplant is browned. Remove and put into a serving bowl.

In a small frying pan, heat the Butter until melted and stir in the Tamari and Sriracha and then drizzle over the Eggplant. Toss with a spoon to coat the Eggplant fully and serve.

Eggplant belongs to the Water Element due to it's dark Purple Color and many seeds. The Tamari adds even more Water. The Sriracha and the Roasting method of cooking bring in the Fire Element and the Butter adds just a hint of Metal.  This is a dish best served with other dishes that incorporate the Wood and Earth Elements.

Posted by Lillian at 1:54 PM No comments: