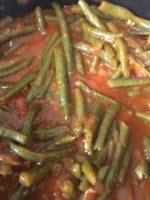 When I used to live by the beach in Redondo Beach many years ago, there was a small Lebanese restaurant near my apartment that I used to go in to on a regular basis. My standard was their wonderful Lentil Soup, but one of the other dishes that I loved was their slow cooked Green Beans in Tomato Sauce. Nowadays, most people cook their Green Beans so that they are still crisp, but once in a while, I really like soft, tender Green Beans. That restaurant has long since closed and I don't live down there anymore either, so I've been making Green Beans their way ever since. I found out that the special seasoning was Allspice, which is one of those spices that goes so perfectly with Tomatoes. I like to use fresh Tomatoes, as I think the flavor is so much better, but in the winter, canned Tomatoes work well too. Just be sure to add a bit of Sugar to sweeten up the somewhat acidic canned Tomatoes. I've also found out that it is common for Green Beans to be cooked until they are soft in many Mediterranean countries. But, if you only like your Green Beans crisp, just don't cook them so long!

Bring a small pot of Water to a boil and drop in the Tomatoes for 1 minute. Remove and peel. Then scrape out the seeds and chop.

Green Beans are a Wood Food and either of the Broth and Olive Oil both add some more. The Tomatoes bring in the Fire Element and the Metal Element is found in the Allspice, Onions and Garlic.  If you serve this side dish with a Water main dish, like Fish and serve a sweet dessert, you will have a completely balanced meal!

Posted by Lillian at 6:14 PM No comments: 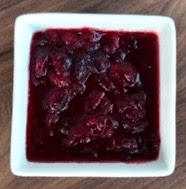 Posted by Lillian at 5:14 PM No comments: 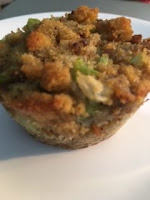 My favorite dish at Thanksgiving is actually the Dressing, which last year I made into Muffins and I'm going to do that from now on. This isn't a recipe - it's a way of cooking the Dressing so that you have individual servings. Just be sure to use the Egg in the recipe to hold the Dressing together. We split the Dressing Muffins in half and poured Gluten Free Gravy all over them and we were all very happy, We will be making these again this Thanksgiving!

Heat the oven to 350 degrees. Spray cupcake tins with oil. Then scoop dressing into the cupcake tins, rounding the top of each with a spoon.  Place in the oven and cook for 25 - 40 minutes or until the tops are browned.

Other Thanksgiving Recipes on this Blog:

Many of you who are my students know that it has been a very busy time for me for both personal and professional reasons. And by the way, my Cookbook will be ready very soon!  So, I haven't done much cooking except that on the last day of my recent module, I decided to bring in lunch since there was a Sounders soccer championship going on in the stadium nearby and all the restaurants nearby were booked for lunch. I made my usual Chicken Salad and Tuna Salad along with a Bean Salad that was so good that I had to share it here and also so I wouldn't forget how I made it! It's really a homemade Salsa mixed in with Beans along with some Corn and Green Peppers. I added Avocado too. It was a huge hit especially with my Vegan students, and I realized what a great Potluck dish this would be. I will definitely make it again, especially for a crowd!  I forgot to take a photo and will add it next time I make it.

Drain the Beans in a Colander, rinse and drain again. Put the Beans into a large mixing bowl.

In a small mixing bowl, add together the Lime Juice, Vegetable Oil, Serrano Chili, Salt and Sugar. Stir to combine well.  Pour over the Beans and mix well.  Add the Avocado, if using and stir in gently.  Let the Bean Salad sit for at last 15 minutes, preferably longer in the refrigerator.  When ready to serve, sprinkle with Cilantro leaves.

Beans belong to the Water Element, especially Black Beans and Avocado adds in a bit more Water along with some of the Wood Element too. The Wood Element is further enhanced by the Lime Juice. The Green Pepper belongs to the Fire Element, with a bit of Wood *because of the color) and the Serrano Chiles and Tomatoes make sure that the Fire Element is fully represented. The Corn contributes the Earth Element and the Onion brings in the Metal Element, along with the Cilantro. This is a beautiful, colorful salad so you probably guessed that it contained al Five Elements and it does in a very delicious way!