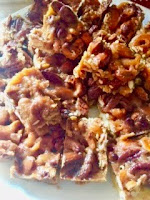 By now I've eaten way to many Christmas cookies, but I wanted to share my absolute favorite of the season - Kelly's Gluten Free Nutty Shortbread! She adapted the recipe from Sunset Magazine and uses a combination of Cashews, Pecans, Walnuts and Almonds mixed up in a Honey Caramel on top of a traditional Shortbread, only this time it is Gluten Free. I cannot even tell you how delicious these are - you are just going to have to make them and see for yourself!

Blend the Butter and Sugar together in a food processor or stand mixer until creamy. Then add in the GF Flour and Salt and mix until the mixture is like fine sand and just comes together when you pinch it. Press the mixture into the pan and bake for 10 minutes. Remove from the oven and put on the Nutty Topping. Cook for an additional 20 - 25 minutes. The Nut mixture should be bubbling and just slightly browning.  Cool and cut into squares.

Put the Butter, Honey and Sugar in a non stick frying pan. Heat to boiling and then add in the Nuts. Toss to coat and pour over the Shortbread.

Since this is a sweet cookie made with both Sugar and Honey, this is definitely mostly and Earth treat. Almonds and Cashews add even more Earth. But, the Walnuts and Pecans bring  in the Water Element and the Rice Flour in the GF Flour adds in some of the Metal Element and the Butter brings in a lot more. Only the Wood and Fire Elements are missing, but serving these Nutty Shortbread with Coffee or Tea fixes that and then just be sure to add a Wood Food at another meal.

Posted by Lillian at 1:59 PM No comments: 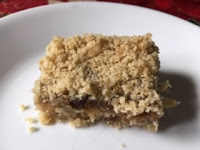 Every year I try to add one different cookie to the usual assortment and of course usually leave off one too. so we are not inundated with cookies. As it is, I do give away as many as I can!  This year I made Date Bars, which I haven't made since I was a teenager and that was a very long time ago!  This was one of my Father's favorites, so it has a special kind of nostalgia attached to it. So, I pulled out an old recipe card and adapted the recipe. I have no idea where the original recipe came from, but it was a very popular cookie way back then.

I needed to make it Gluten Free, which wasn't difficult at all and I lowered the amount of Sugar because I think Dates are very sweet enough all on their own. I also added just a little more Butter, as I think Gluten Free Flour Blends are a little drier. And I thought a pinch of Salt would balance the flavor. Anyway, it turned out wonderfully and I had forgotten how delicious Date Bars are!

Place the Dates and Water in a small saucepan. Heat, stirring often until the Dates soften or until they become a paste - about 7 - 10 minutes. Remove from the heat and cool.

In a food processor or a big bowl, cream together the Butter and Brown Sugar. Add in the Oats and Flour and blend until the mixture is crumbly but sticks together when you pinch it.

Pour half of the crumb mixture into the prepared baking pan and press down. Spoon the Date filling over the crumbs carefully with the back of a spoon. Sprinkle the remains crumbs on top, pressing down lightly.

Bake for about 30 minutes or until the top is lightly golden brown.  Cool and cut into squares.

Dates are very sweet and very sticky so they are certainly Earth foods. The Oats and Brown Sugar add even more. The Butter brings in the Metal Element as does the Rice Flour in the baking mix. But this is clearly a Earthy treat!

Posted by Lillian at 3:27 PM No comments: 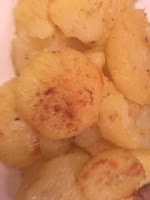 I've been on a Potato kick lately and since I was a bit tired of eating them the usual ways, I wanted to try something different. I love the recipe from Edna Lewis for Potato Casserole (previous post) so I decided to deconstruct it. I ended up cooking the Potato slices in Chicken Broth and then putting them on a baking sheet, pouring some melted Butter on top and cooking them until they were browned. Oh my goodness, they were so good - savory and buttery and delicious! The advantage to doing it this way is that it takes a lot less time. Plus, the leftover Chicken Broth is perfect for soup, as it is already a little bit thickened. I think it's a great side dish for the holidays as the Potatoes can be cooked ahead and then put in the oven after the main dish has come out and is cooling.  I'm going to be making this dish again and again

Heat the oven to 450 degrees

Place the Potato slices on a parchment covered baking sheet. Spread them out and drizzle with the melted Butter. Sprinkle with Salt, if using. Place in the oven and cook for 10 minutes or until the Potato slices are golden brown. 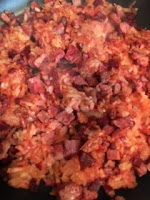 I used to go to this breakfast cafe where I would have to wait a long time to get a seat and every time I went, I ordered their Red Flannel Hash. I decided long ago that it was better if I learned to make my own, since standing in the rain in Seattle isn't fun. And, the restaurant is pretty far away too. So, I had some leftover Corned Beef and I also had a package of cooked Beets the other day and voila - Red Flannel Hash was ready to be made once again.

For those of you who have never had this dish, it is simply Corned Beef Hash with chopped cooked Beets added in. It makes the whole dish red and since the ingredients kind of mush together, it is supposed to look a lot like red flannel cloth. Although I've made Hash many times with cubed pieces of Potato, I think Red Flannel Hash turns out better when you grate the Potatoes, although you can certainly use leftover Potatoes and it will be even faster. I took a tip from Serious Eats as I soaked the Potato Shreds in cold water, drained them and then microwaved them quickly before cooking them in a frying pan. I also don't add in the Onion or the Beets or the Corned Beef until the Potatoes are already somewhat crisped up or they will overcook. You can leave out the Beets if you want and then you will have just Corned Beef Hash, which is also delicious.  Served with a Sunny Side Egg, I think this is the perfect breakfast!

Grate the Potatoes and place them in a bowl and cover with cold water. Drain and place on a microwave safe plate. Put in the microwave and cook for 2 minutes.

Heat a large frying pan on medium heat. Add in the Potatoes and press with a spatula to flatten and cover the bottom of the pan in a thin layer. Cook (be patient!) until the Potatoes are golden brown on that side. Turn over in sections and cook until that side is also browned. Then push aside the Potatoes and then add in the additional Tablespoon of Oil  and the Onions. Cook until the Onions start to soften. Then add in the Corned Beef and Beets. Stir to combine thoroughly  Flatten the mixture and crisp up again on one side and then the other. Put onto two individual plates and top with fried Eggs to serve.

Beets and Potatoes both belong to the Earth Element, so that's the dominant element in this dish.  The Onions bring in some Metal and the Eggs bring in some of the Water Element. Serve this dish with Coffee or Tea and you add the Fire Element. If you serve it with Wheat Toast, you add in the missing Wood Element or you can serve it with a tart juice, like Pineapple or Orange to create a balanced breakfast too.

Posted by Lillian at 3:21 PM No comments: