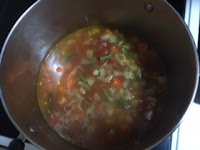 I had a friend coming over tonight who is Vegan and I wanted to make a nourishing vegetable soup. I had two Fennel Bulbs in the refrigerator and decided to use them. I never think of using Fennel in Soup as I usually braise it or make it into a salad. But tonight I was craving soup and so I used it along with some Carrots, Green Beans and Onions. I also added a can of Tomatoes and some Vegetable Broth and ended up making a delightful soup - I was so pleased! The Fennel has a somewhat sweet flavor when cooked and the end result was a bit more like a vegetable stew. It was delicious, fast and easy too!

Put the Olive OIl in a large soup pot and add in the Onion and Fennel. Cook, stirring frequently until they are softened.  Then add in the Green Beans and Carrots, the Vegetable Broth, the Tomatoes and the Salt and Bay Leaf.  Bring to a boil and reduce the heat to a simmer. Cook for 30 minutes.

Soup by it's very nature is a Water Food, so that element is automatically involved in this dish. Fennel is one of the few Metal Vegetables, so that element is covered and the Onion adds even more.  The Carrots and Green Beans bring in the Earth Element. The Tomatoes contribute the Fire Element. The Olive Oil is the only representative of the Wood Element but the Vegetable Broth has Celery in it so the Wood Element is there too.  So, this Soup is more balanced than I expected!

Posted by Lillian at 8:43 PM No comments: 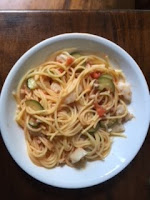 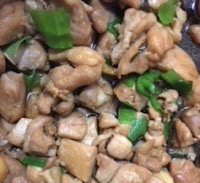 Three Cup Chicken is a very popular Taiwanese dish. My Aunt once made it for me and I watched her carefully. At the time my question was Why is it called Three Cup Chicken - is it because it makes 3 cups of Chicken?  The answer was that the sauce was made up of 3 cups of Sesame Oil, Rice Wine and Soy Sauce. But she reminded me that she was talking about teacups - not measuring cups! The other flavoring include a bit of Sugar along with Thai Basil and some Scallions (Green Onion tops) that are added at the end to maintain the aromatic flavors. This dish is traditionally served over Rice.

I like to make it with the Chicken Things cut into small pieces and I use Low Sodium Tamari so the dish isn't too salty. I also use Taiwan Rice Wine, which is clear (and Gluten Free). This dish is really quick and easy to make and absolutely delicious!

Heat a sauce pan over medium high heat and add in the Sesame Oil.  Then add in the Garlic and Green Onion. Cook until you can smell the fragrance.  Then add in the Chicken and cook until the Chicken is no longer pink.  Pour in the Tamari, Rice Wine and Sugar. Stir until Sugar is absorbed and the sauce comes to a boil. Reduce heat and simmer for 15 minutes, stirring frequently. Sprinkle with the Thai Basil and Green Onions. Toss to combine and serve with Rice.

Posted by Lillian at 4:21 PM No comments: