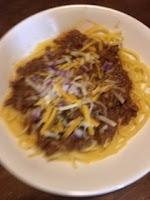 Here's a recipe I've been meaning to post for a while. I have a friend from Cincinnati who told me so much about Cincinnati Chili that of course I had to try making it. I got the ingredients from his Mom when she was visiting one time and finally made it at home. For those of you who don't know, Cincinnati Chili is served one of 4 or 5 ways: One way is just the Chili with Meat; another way is with Spaghetti Noodles; another way is with Raw Onions and/or Cheese and the last way is with Kidney Beans. I'm not sure if that's the correct order of ways, but these are the right ingredients for authentic Cincinnati Chili. I like it best with Gluten Free Spaghetti and topped with sweet chopped Onions, my son and daughter-in-law definitely also wanted lots of Cheese. The Chili itself is unusual because it is spiced with Cumin and a bit of Cinnamon, Allspice and Cloves, which gives it an almost Middle Eastern flavor and because of the Chocolate added, it also reminded me a bit of Mexican Mole. It's really a delicious Chili!

Brown the Ground Beef in a frying pan with the Onion and Garlic, breaking up the meat as much as possible. Cook until the meat is no longer pink. Add in the Spices and Chocolate (if using) then the Tomato Sauce and Beef Broth and Kidney Beans (if using).  Bring to a boil and then reduce to a simmer. Cook for 30 minutes.


Ground Beef and Beef Broth belong to the Earth Element. The Spices and the Garlic and Onions contribute the Metal Element and the Cheese adds even more if you use it, The Kidney Beans bring in the Water Element (otherwise it is not strongly present except in the liquid nature of this Chili). The Fire Element is represented by the Tomato Sauce and the Red Pepper Flake sand Chocolate if you add them. The Wood Element is present if you use Spaghetti made with Wheat flour and serving it all the ways is a balanced meal. But, the Wood Element is absent if you use Gluten Free Spaghetti like I did, so be sure to add a green vegetable for balance.

Posted by Lillian at 8:59 PM No comments: 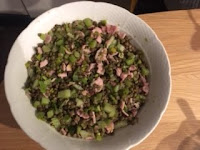 I returned from England last week and have been so jet lagged that I haven't been cooking anything new. But, I did make something at my Airbnb the week before that was so good, I want to share it with you and I want remember it to make again too. I had limited ingredients and sometimes that's a blessing. I knew I wanted to make a Lentil dish as I wanted leftovers for lunch the next day and I thought I had a jar of Sun Dried Tomatoes in the fridge, half full. But it wasn't there and all I could find that might work were Butter, Celery, Leeks and Bacon. The Bacon of course was English Bacon, which is a lot more meaty and a lot less fatty. Here in America it's called Back Bacon (and a bit like Canadian Bacon only thinly sliced).  I cooked the Lentils in Water with Chicken Bouillon cubes added (as I couldn't find canned Chicken Broth) until tender. This flavors the Lentils so no extra salt is needed. Meanwhile, I sautéed the Leeks and Celery in Butter with the Bacon. When the Lentils were done, I drained them and added everything together. It was so good and even better the next day!

2 cups of Green Lentils
4 cups of Chicken Broth (or 4 cups Water with 2 Gluten Free Bouillon Cubes)
1 large or 2 small Leeks, green part cut off, sliced in half and then sliced thin
2 stalks of Celery, trimmed and sliced thin
6 pieces of English Bacon (or 1 cup of Canadian Bacon or Ham) cut into small pieces
3 Tablespoons Butter
fresh ground Pepper to taste

Put the Lentils and the Chicken Broth in a small pot. Bring to a boil and then reduce heat to a simmer.  Cook for 20 minutes and check to see if they are tender. If not, cook for an additional 5 - 10 minutes and check again. Lentils should take no longer than 40 minutes until they get tender. When tender, drain off the broth and put into a mixing bowl.

In a frying pan, melt the Butter and add in the Bacon, Celery and Leeks. Cook until the Leeks and Celery are softened. Then add to the Lentils and toss to mix thoroughly. Sprinkle with Black Pepper and serve warm or cool.

Lentils as Pulses belong to the Earth Element. The Leeks and Butter bring in the Metal Element. The Celery and Chicken Broth contribute the Wood Element and the Bacon makes sure the Water Element is present too. The Fire Element is only found in the tiniest bit of Black Pepper so it would be good to serve a green salad with Tomatoes to bring that element in too for a more balanced meal.