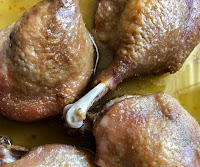 Mix together the Salt and Five Spice Powder in a little bowl.
Season each Duck Leg all over with 1/4 teaspoon of the Seasoning. Place each Duck Leg skin side down in a frying pan big enough to hold all 4 or cook them in two batches. Heat the pan to medium high for 7 - 8 minutes to render some fat and brown the skin, turn over and cook for an additional 5 minutes.

Posted by Lillian at 9:59 PM No comments: 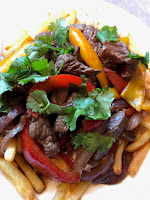 I have a great love for both Steak and French Fries so any meal where they are served together makes me very happy!  Lomo Saltado goes a bit further and serves the Steak on top of the French Fries, which allows some of the Fries to get softened from the sauce of the dish. It's absolutely delicious!  It is a dish from Peru where a Chinese stir-fry met Peruvian Potatoes. It's part of the Chifa Cuisine of Peru. My Mom's Peruvian friend made it for me a long time ago and it became one my favorite dishes to make for many years. But like many things I used to cook, I completely forgot about it until recently when I was talking to my son about cooking frozen French fries and I told him how I used to use them for this dish.  Of course, I had to show him how good Lomo Saltado is and I am happy to say he loved it too!

I do several things a little differently then the restaurant versions. First, I don't use the Aji Amarillo Chiles, as they are very hot. You can buy the paste online. My son added hot sauce to his, but I like mine not spicy. Also, I don't add Vinegar, even though it's traditional. However, I do use Soy Sauce (Gluten Free naturally) and I like to add a bit of Cumin too. It's usually made with a cut of Beef like a Sirloin Steak, but I used Bison Steaks instead. Be sure to use a wok if you have one, but a cast iron skillet is a good substitute.

Lomo Saltado actually a very simple dish, especially if you use frozen French Fries. They actually take the longest to cook. as once the Steak, Red Onion, Red Peppers and Tomatoes are cut up, it takes only minutes to cook it all in the wok.This dish is easily doubled if you are serving more people, but be sure to cook the meat 1/2 at a time to make sure it browns properly. Then you pile the French Fries on plates and serve the Steak on top. You can also serve it on the side if you want your French Fries to stay crispier and if you like, you can serve it with Rice too. It's so good!

Serve with 4 cups of French Fries, cooked in the oven until crisp.

Slice the Steak into 1/2 inch wide pieces. Dry with paper towels and sprinkle both sides with Salt and Pepper.

Heat a wok and add in 2 Tablespoons of OIl. Put in the Steak slices and let cook until it gets brown. Then turn the slices over with a spatula and cook the other side. Remove to a bowl.  Wipe out the wok and add the additional 1 Tablespoon of Oil. Then put in the Red Onion and Peppers. Cook until the Onions soften, about 2 minutes. Then add in the Tomatoes and  cook until the Onions just begin to brown and the Tomatoes are soft, about another minutes. Then add in the Cumin, toss it all together and then add in the Meat. Drizzle in the Soy Sauce and add the Hot Space and Vinegar, if using. Toss together again to blend all the ingredients and take off the heat.

To serve:  Put the French Fries on plates and divide the Meat Mixture and the sauce and place on top or on the side of the Potatoes. Sprinkle with Cilantro to serve.

Beef belongs to the Earth Element and I think Bison probably does too. The Potatoes are also an Earth food. So overall, this is a very Earthy dish!  The Onions contribute the Metal Element along with the Cilantro. The Peppers, Tomatoes and Hot Sauce all bring in the Fire Element and the Soy Sauce adds the Water Element.  Only the Wood Element is missing except for the hint of it in the Cilantro, so be sure to serve a leafy green vegetable on the side. 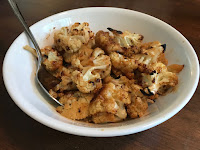