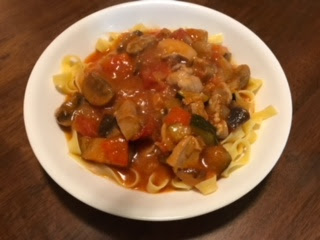 I was in the mood for Chicken Cacciatore and I reimagined as a Pasta Sauce. Now I know you can serve Chicken Cacciatore on top of Pasta as the sauce is so good, but I don't like cutting up the big chunks of Chicken to eat it.  So, I cut the Chicken into smaller chunks. Of course I used the traditional vegetables in this dish - Onions, Garlic, Red Pepper and Mushrooms, but since I wanted a one-dish meal, I also added cut up Zucchini and Eggplant.  I served it over my new favorite Gluten Free Pasta - La Venziane Fettucine. Oh my, it turned out so well and was so delicious!  I may not make Chicken Cacciatore the old fashioned way again. This is a perfect winter meal!

In a large heavy pot, put in 2 Tablespoons of Olive Oil. Then add the Onions, Garlic, Zucchini and Red Pepper and cook until you can smell the Onions are soft.  Add in the Chicken and cook until one side becomes lightly browned and turn over to brown the other side.  Add in the Wine and the Tomatoes breaking up the Tomatoes with the Spatula. Also add in the Thyme and Bay Leaf. Bring to a boil and reduce to a simmer.

In a frying pan, put in the other 2 Tablespoons of Olive Oil and add the Eggplant and Mushrooms. Cook until the Eggplant softens.  Then add to the pot.

Cook the Chicken Cacciatore for about 40 minutes. Serve over cooked Gluten Free Pasta or if you are not Gluten Free, over the Pasta of your choice.

Chicken belongs to the Wood Element so that Element is covered. The Tomatoes, Wine and Red Pepper make sure that the Fire Element is also present. The Zucchini and Mushrooms contribute the Earth Element and since the Gluten Free Pasta I used is made of Corn, it adds even more. Regular Pasta would add more Wood as it is made from Wheat. The Metal Element is present in the Onion and Garlic along with the Thyme and Bay Leaf.  Finally, the Water Element is covered by the Eggplant. This then is a balanced Five Element meal all by itself!

Posted by Lillian at 9:44 AM No comments: 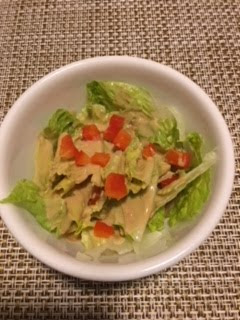 It's the 8 year anniversary of Five Element Food!  I actually can't believe that I have kept this up for so long and I haven't even come close to running out of recipes. It also means that it is Chinese New Year.  It's the Year of the Dog (there's a forecast on my website - www.lotusinstitute.com). And, as always, I have to eat as many lucky foods as I can in the next two weeks (see Chinese Lucky Foods on this blog). Since I am celebrating Chinese New Year's Eve tonight, I have made of a lot Dumplings and Radish Cake and will make some Pea Sprouts (all previous posts). And every year I add some new dishes and there are many foods I will make in the coming days.

Tonight, I made a Sesame Seed Dressing that I served on Romaine Lettuce and a sprinkling of diced Red Pepper.  Lettuce is lucky because it sounds like increasing wealth and Sesame Seeds increase creativity.  I had a similar salad at a Dumpling House not that long ago that I loved, so I came home and made it and have saved the recipe for this important Chinese holiday.  The only trick is to decide how much of the Tamari to use since different kinds of Tahini have such different flavors and consistencies.  Be sure to buy Tahini that has not yet been made into a sauce for Falafel or used as a dip - The Tahini I am talking about should be like a paste that can be found either be in a jar or a can and should made with ground, roasted Sesame Seeds. There is also a question of how much Broth or Hot Water to use based on how thick the Tahini is, so use your best judgement and start with the smaller quantity and add more of the Tamari or Broth/Water as needed. This Sesame Salad Dressing should be on the thin side and drizzle it on right before serving. This Sesame Salad is delicious and would be good anytime. Happy New Year!

Put the Tahini in a bowl and add the hot Chicken/Vegetable Broth or Hot Water. Stir to combine.  Add in Tamari, Sesame Oil, Rice Vinegar, Salt, Sugar and Chili (if using).  Mix thoroughly and taste, adding more Tamari, Salt, Sugar or Broth if needed to achieve your preferred taste and consistency.

Drizzle the Sesame Salad Dressing over a Salad made of Romaine Lettuce sprinkled with 1/4 cup of diced Red Pepper.

Lettuce belongs to the Fire Element and the Red Pepper and Chili Oil adds even more. The Tahini, made of Sesame Seeds is part of the Water Element and the Sesame Oil and Tamari add even more.  The Vinegar brings in just a hint of the Wood Element and the small amount of Sugar makes sure that the Earth Element is barely present.  So be sure to serve this with some other dishes in the meal made with foods from the Metal Element as well as the Earth and Wood Elements. 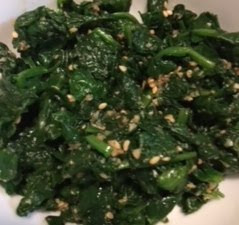 There was a really good price on bagged Spinach when I was at the store the other day and I bought 2 bags. I decided I wanted to make a chopped Asian Spinach Salad and called my son to get his recipe. The way he makes it is wonderful.  He created this recipe and is letting me share it. It's easy to make and is a perfect side dish as it can be made ahead.  All that is required is to blanch the Spinach, then chop it. The dressing is made by toasting Sesame Seeds, then crushed and mixed with Mirin, Tamari, Sesame Oil and a bit of Sugar. That's it and it is so good!

Heat a small pot of water to a boil. Add in the Spinach Leaves, press them down and let blanch for 1 minutes. Drain and rinse with cold water. Then squeeze the leaves to remove more liquid.  Place the Spinach on the chopping board and chop into small pieces.  Put into a serving bowl.

In a small frying pan, heat the Sesame Seeds until they are lightly brown and you can smell the fragrance of them. Remove from the heat and put into a Mortar.  Crush the Sesame Seeds with the Pestle.  Then add in the Mirin, Tamari, Sesame Oil and Sugar. Pour over the Spinach and toss to mix.  Serve immediately or refrigerate to serve later.

Spinach, as a leafy green, clearly belongs to the Wood Element.  The Sesame Seeds, Sesame Oil and Tamari contribute the Water Element.  The Mirin contributes the Fire Element and since it's sweet brings in a hint of the Earth Element too as does the Sugar. Only the Metal Element is missing so be sure to serve this with Rice for more Metal and another Earth food to create a Five Element balance.

Posted by Lillian at 8:17 PM No comments: 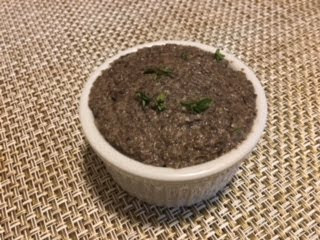 I recently ate at a wonderful Seattle restaurant, Tilth.  One of the appetizers that I loved was their Mushroom Pate. It was smooth and creamy and delightful spread on Crackers. I've been thinking about it ever since and tonight I decided to try to make it.  I had a big bunch of Button Mushrooms in the fridge as I was originally going to roast them (a previous post) but they got repurposed in this Pate and I'm so glad - it was so delicious!  I used Shallots and Thyme for seasoning and Butter to cook the Mushrooms in and also make it more creamy.  Ii used a Stick Blender to puree it, but it would actually be smoother in a regular blender I think. Anyway, I was so happy with this recipe that I'm sharing it with you. This recipe is a keeper!

In a large frying pan on medium high heat, melt the Butter and add in the Shallots. Cook until the Shallots soften. Then add in the Mushrooms, Salt and Thyme, reserving a few leaves for garnish. Reduce heat to medium and cook, stirring often until the Mushrooms exude all their juices and then keep stirring until the liquid evaporates. Place the Mushroom mixture in a mixing bowl and use a Stick Blender (or put into a blender) and puree until smooth.

Spoon into two ramekins and smooth the top. Sprinkle with the remaining fresh Thyme leaves and serve with Crackers.

Mushrooms belong to the Earth Element. The Butter, Shallots and Thyme bring in the Metal Element and depending on the kind of crackers you serve this Mushroom Pate with, you will be either adding Wheat, which is the Wood Element, Rice Crackers which give you more Metal or Seed Crackers which bring in the Water Element. This dish is clearly meant to be eaten before a main course, so be sure to bring in the missing Elements there. 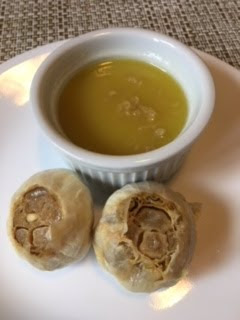 I recently bought a great big bag of Garlic at Cash and Carry and frankly I knew I couldn't use it up that fast. So, I decided to roast about 8 heads of it. The first night, we ate it spread on sliced toasted Baguettes (mine was Gluten Free) and then a few days later I added it to a Gravy for a Pork Roast. Finally, I decided to make a Roasted Garlic Vinaigrette and it was so delicious that is now one of my favorite Salad Dressings!  It emulsifies the Vinegar and Olive Oil making it rich and creamy. The roasted garlic flavor blends so well into the Vinaigrette that it doesn't have a strong garlic flavor. It's wonderful. I only made enough for a small salad so double this recipe if you are serving more than 2 people. I used it to dress a salad composed of Arugula, Baby Kale, Cucumbers, Tomatoes and Pine Nuts and I loved it!

In a mixing bowl, mash the Roasted Garlic with a fork. Add in the Olive Oil, Vinegar, Sugar and Salt.  Stir to combine and then use a stick blender to puree.  Serve over the Salad Greens of your choice.

Heat the oven to 450 degrees  Cut the top 1/4 of the head of Garlic off to expose the Cloves. Place them into a piece of foil and drizzle the Olive Oil on top and wrap foil up around the garlic and seal. Place on a boing sheet and roast in the oven for 50 minutes. Remove from oven. Open the foil pouch and test the softness of the Garlic with a sharp knife. If it is soft enough, let cool. If it is still hard, return to the oven for an additional 10 minutes. Let cool until ready to use. The Roast Garlic can be made ahead of time and refrigerated.

Garlic belongs to the Metal Element and when it's cooked long and slow, it also caramelizes which gives it a bit of the Earth Element too. The Sugar brings in a bit more of the Earth Element and the Cucumbers add even more. The Fire Element is represented by the Arugula and the Tomatoes. The Olive Oil and Vinegar contribute the Wood Element as does the Baby Kale. Finally, the Pine Nuts make Sure the Water Element is present too!