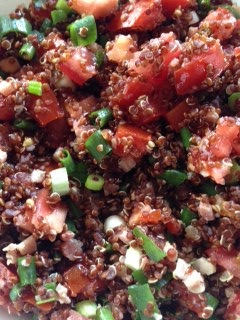 It's hot, hot, hot here in Seattle, which is rare. And when it gets hot, I lose my appetite for almost everything except salads.  So tonight, I pulled together some ingredients to create a salad that I really loved. I went to Trader Joe's yesterday, one of my favorite stores and picked up some Red Quinoa and a little package of Pancetta.  I cooked the Quinoa and then added the browned Pancetta and tossed it, while hot, with cut up Tomatoes and Green Onions and a sprinkling of Maldon Sea Salt. Then I cooled it off in fridge for a while and had what I thought was the perfect light meal for a hot night.

In a small pot, put in the Olive Oil and heat, add the Quinoa and toast until hot. Add in the water and the salt and bring to a boil. Cover and reduce heat and cook for 20 minutes.

While Quinoa is cooking, cook Pancetta in a frying pan until browned and lightly crisped.  Remove from the fat and put on a paper towel-covered plate.

When Quinoa is done, drain the excess water and put the Quinoa into a bowl. Add in the Tomatoes, Sea Salt and Green Onions and toss to mix. Put the Pancetta on top and put into the fridge for about an hour or more.  When ready to serve, toss in the Pancetta.

As Quinoa is a seed, it belongs to the Water Element.  The Pancetta adds even more Water as it is a salted pork product.  The Tomatoes contribute the Fire Element and the Green Onions add a combination of mostly the Metal Element but also some of the Wood Element although to achieve balance, it would be good to serve this with some other green vegetables. And, the Earth Element is missing, so be sure to serve something sweet for dessert.

Posted by Lillian at 7:49 PM No comments: 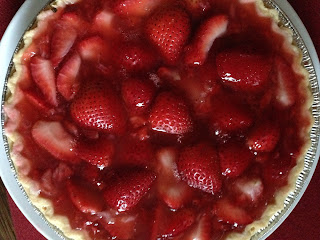 I don't make dessert very often and when I do, I tend to go for fruit desserts - mostly because I've never been a big fan of chocolate, which I know is shocking to most people. I also didn't grow up eating dessert because my Mom didn't like them at all. Dessert is just not a Chinese thing. So, when my American Father would occasionally give us a big treat, he would take us to Marie Callender's for a piece of pie.  And when strawberries were in season, my first choice was always fresh Strawberry Pie. Once I got older, I started making these pies after I found out how easy they are to make. I got out of the habit, but today when at the grocery store, I saw some really lovely Washington strawberries and I was inspired to make it again for the first time in about 20 years! I had forgotten how much I love this pie and will be bringing it back much more often from now on. I used a frozen Gluten Free Pie Crust from Whole Foods that I baked until it was lightly golden brown, although pie crusts are pretty easy to make with Cup 4 Cup flour and butter. I also add a little bit of lemon juice to keep the syrup from being cloyingly sweet. Served with a dollop of lightly sweetened whipped cream, Fresh Strawberry Pie is a truly delicious slice of early summer!

Take 1 cup of the Strawberries and mash with a fork.  Add them to the Water and Sugar in a small Saucepan.  Stir in the Cornstarch to blend. Heat until boiling and cook until thickened.  Let cool slightly and then add to the rest of the Strawberries. Toss with a spoon to coat them all.  Then pour the Strawberries into the Prebaked Pie Shell and cover with foil. Turn some of the top Strawberries skin side up if desired. Put in the refrigerator and chill for several hours.  Served with lightly sweetened Whipped Cream if desired or if you are trying to go Lactose Free, Coconut Creme would be a good substitute.

Strawberries look like bright little red hearts so of course they belong to the Fire Element.  And as this is a sweet dessert, it is clearly an Earth food.  The Rice and Tapioca flours in the Pie Crust contribute the Metal Element along with the Whipped Cream. And the bit of lemon juice does bring in the Wood Element, but not much. Therefore, this is a great dessert  to serve with a meal that includes other foods that represent the Water and Wood Elements to find a Five Element balance. 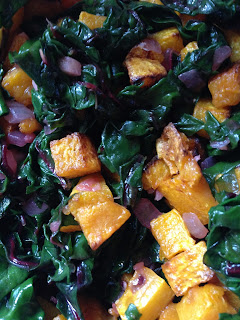 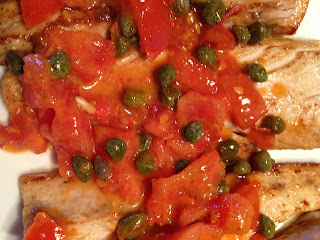 I am apparently on a fish kick, which often happens when the weather is warm and here in Seattle it is like summer!  My current favorite thing is making light sauces to put on top of quick pan seared fish. The one I made tonight was so good that I am sharing it with you. I like to pan sear fish in a small amount of butter mixed with oil so that it doesn't burn. Then when it is done, I like to make a little pan sauce with various things.  This sauce is made of hopped up tomatoes, lemon juice, capers and a little more butter. It is so delicious and would be good on so many kinds of fish. The fish in the photo are Mahi Mahi filets that I bought frozen from Trader Joe's. I think this sauce would also be good on Sea Bass or even Dover Sole. I served it with some Rice Pilaf and some Zucchini and it was such a lovely (almost) summer meal.

Melt butter with oil in a large frying pan.  Sprinkle the fish with salt and pepper on each side and then add the fish fillets to the pan and cook for about 3 - 5 minutes per side (thin fillets for 3 minutes, thick for 5 minutes).  Remove to a serving tray.

Add additional butter to the pan and add in the chopped Tomatoes, Lemon Juice, Sugar and Capers.  Cook until the Tomatoes start to soften.  Pour over the fish and serve.

Fish belongs to the Water Element and topping it with Tomatoes contributes the Fire Element. The Wood Element is represented by the Capers and Lemon Juice.  The Metal Element comes in with the Rice Pilaf and I made sure the Earth Element was present by serving Zucchini as a side dish to make a perfectly balanced Five Element meal! 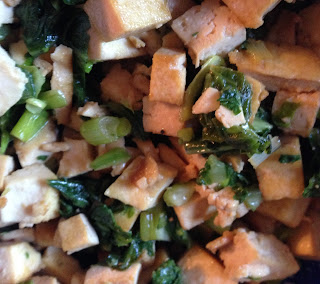 I have certain childhood memories about food that are hard to satisfy if you don't make the food yourself. One of the things I crave frequently is Salted Mustard Greens. I have occasionally found them at the 99 Ranch Market, but rarely so I finally decided to make them myself. And, it was so easy that I will not go back to buying them again. You simply chop up mustard greens, mix in the salt and let it sit in the refrigerator for several days.  Then you add them to soups and stir fries for a lovely salty and slightly bitter flavor.  I like Salted Mustard Greens best when mixed with Tofu of some kind. For this dish, it is a simple combination of Tofu, marinated in Tamari and stir fried with some green onions and the Mustard Greens.  That's it. It's simple and delicious and very healthy too!

Mix Mustard Green leaves with the salt in a little glass container with a lid.  Put in the refrigerator and let sit, stirring once a day for three days.

Put the Tamari in a small bowl and toss with the Tamari for 5 - 10 minutes.  Then heat a frying pan and put in the oil.  Add in the Green Onions and stir fry until they start to wilt. Then add in the tofu and cook until it just begins to brown, stirring frequently. Add in the Salted Mustard Greens and Red Chili Flakes (if using) and toss until heated through.  Serve with Rice.

Tofu belongs to both the Water Element (as it comes from beans) but since it is processed and white, it also belongs to the Metal Element so those elements are both already covered. The Tamari adds even more Water and the Green Onions adds more Metal.  The Mustard Greens belong to the Wood Element and the fact that they are salted adds even more Water.  If you use the Red Chili Flakes, you bring in the Fire Element, otherwise add another Fire food or beverage - tea is good. And then, only the Earth Element is missing. Serving another dish in a Family style meal that incorporates Earth is recommended to achieve Five Element balance.