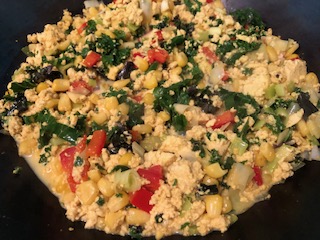 I had some veggies and leftovers languishing in my fridge and needed to use them up. So, I made a Tofu Scramble and added them in. My good friend Deirdre often makes Tofu Scrambles for us when we travel to our classes and stay in an Airbnb.  So, I took one of her tricks, which is to use Turmeric to color the Tofu so that it looks so much more appetizing - it's also good for lowering inflammation. Besides the Tofu, I used a Leek, although you could easily use Onions or Shallots or Green Onions, and a half of a Red Pepper, along with some leftover Corn and a big handful of chopped Kale that was part of a vegetable delivery gift. I sautéed them all together and added a bit of Vegan Chicken Broth powder and some Tamari. It was delicious!  Not only did I clean out my fridge a bit (and throw in everything I could except the Kitchen Sink - as the saying goes), I made a wonderful dish just perfect for a healthy lunch, although it would be good for breakfast too!

1 Leek, green part cut off, cut in half, rinsed and then cut into small pieces (or 1/2 cup of chopped Onion or Shallots)

1/2 large Red Pepper, trimmed and cut into a small dice

2 cups chopped Kale or other Greens

1 Tablespoon of Tamari or Soy Sauce

In a wok or a large frying pan, heat the Oil and add in the Leek and Red Pepper. Cook until it just softens and add in the Tofu, Corn and Kale. Cook until the mixture is bubbling a lot, stirring often and the greens are wilted. Then add in the Seasonings and stir to combine. Taste and adjust, as necessary. Sprinkle with Pepper and serve.

Tofu is part of the Metal Element and the Leeks add even more as do the spices in the Vegan Chicken Broth. Kale, as a dark green Vegetable contributes both the Water and Wood Elements and the Tamari brings in a little more Water. The Red Pepper and Black Pepper makes sure that the Fire Element is present and the Turmeric and the Corn add in the Earth Element. This, then, is a very balanced dish!

Posted by Lillian at 2:51 PM No comments:

Roasted Ratatouille with Ventrache or Pancetta 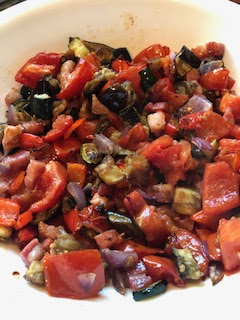 I love making Ratatouille in the Summer when the Tomatoes are ripe. Today, I had my very first harvest of Plum Tomatoes and I was very excited. I was previously gifted with a lot of Zucchini and I almost always have an Eggplant in the fridge too, so it was time to make it! I think having ripe Tomatoes makes a huge difference as they are much sweeter.
Usually, Ratatouille requires the top sauce the vegetables separately before putting it together to cook in a sauce.  But this time I did something different! I decided to roast all the vegetables before putting them together. I used 3 different sheet pans - one small one for the Eggplant and another small one for the Tomatoes and one big one for the Zucchini, Red Onion and Red Pepper. I used Parchment to keep anything from sticking. Then I put them all in the oven after tossing them with Olive Oil and Salt and scooped whatever vegetable was done at 20, 30 and 40 minutes increments. When they were all done, I tossed them all together and added in some cooked Ventreche, which is the French version of Pancetta that I crisped in a frying pan while the vegetables were roasting. But you can leave it out if you are a Vegetarian. I like the extra saltiness and chewy texture it adds. This version of Ratatouille was so easy and so good that I'm going to make it this way from now on! 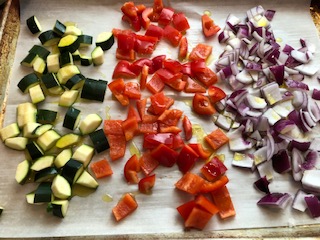 Roasted Ratatouille with Ventracche or Pancetta
1 medium Eggplant, ends cut off and cut into 1/2 inch cubes
1 teaspoon Salt for the Eggplant
2 small or 1 medium Zucchini, cut into 1/2 inch pieces
1 Red Bell Pepper, stem cut off, seeds and membranes removed and cut into 1/2 inch pieces
1/2 large Red Onion, diced
4 Roma Tomatoes cut into a dice
2/3 cup Extra Virgin Olive Oil
1 teaspoon Salt
Sprinkling of Black Pepper
1 cup of cubed Ventrache or Pancetta
Place the Eggplant into a bowl and salt it. Leave while you cut the other vegetables.
Heat oven to 400 degrees. Line two 1/4 sheet pans and one 1/2 sheet pan with Parchment. Or use two 1/2 Sheet Pans but keep the Tomatoes and Eggplant separate
Rinse the Eggplant pieces and put the pieces onto one of the 1/4 sheet pans. Drizzle with 4 Tablespoons of Olive Oil and a little Salt and Pepper.
Then put the Tomato on the other 1/4 sheet pan. Drizzle with 2 Tablespoons of Olive Oil. Sprinkle with a little Salt and Pepper
Then put the Zucchini, Red Pepper and Onions on the 1/2 sheet pan separated a little and drizzle with the remaining Oil and sprinkle with the remaining Salt and a little Pepper.
Place all the sheet pans in the oven. Cook for 20 minutes before checking.
In the meantime, cook the Ventrache or Pancetta in a small frying pan on the stove, rendering the fat and making it a little crisp. Drain on a paper towel lined plate.
Remove the Onion pieces if the edges are starting to brown and place in a bowl. Cook the remaining vegetables for an additional 10 minutes and remove the Zucchini and place in the bowl. Cook for an additional 10 minutes and remove the Red Pepper and Tomato and put into the bowl. Cook for 5 more minutes and remove the Eggplant and add to the bowl. Add the Ventrache (or Pancetta) and toss to coat. Serve warm or cool.
Five Element Analysis
Eggplant and Ventrache (or Pancetta) both belong to the Water Element. The Olive Oil contributes the Wood Element and the Tomatoes and Red Pepper makes sure that the Fire Element is present as well. The Zucchini brings in the Earth Element and the Onions round out the Elements by adding Metal. To me, this is the perfect light Summer meal and it's balanced too!
Posted by Lillian at 9:00 PM No comments: 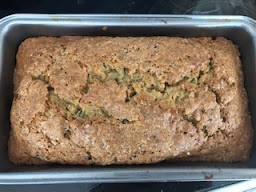 I was given some Zucchini by a friend, as this is the season for lots of Zucchini to be harvested. And, one of the first things i make when I get those big late summer Zucchini is Zucchini Bread. This is a pretty standard recipe with the usual ration of 2 cups of Flour (I used King Arthur's Gluten Free Measure for Measure) to 1 cup of Sugar, although I used Brown Sugar as it makes the loaf more moist  and I then add some kind of fat - in this case I used Oil but you can certainly use melted Butter.  And, of course, I added in 2 Eggs to hold it together  I used Duck Eggs, which are bigger so i also cut back on the amount of Oil by about 2 Tablespoons. I also used a combination of Baking Soda and Baking Powder. Baking Powder is useful when there is no acid in the Batter, which is why I used a bit more, but Baking Soda helps brown baked goods, so I had to include it. I also do something a little different with the Zucchini. Of course, I grated it, but I removed the core of seeds first as I think they are mushy. That allows me to use a bit more Zucchini in the bread and I think that makes it moister. I added just a bit of Vanilla Extract and Cinnamon, as I usually do, but sometimes I will grate some Lemon Zest instead.  And, I like to sprinkle the top with a little Sugar in the Raw, mostly because it's pretty, but also because it gives it some crunch. So, if you have too much Zucchini, this recipe is for you!
Zucchini Bread
1 1/4 cups Grated Zucchini (cut in half and seeds scooped out before grating)
2 Eggs
3/4 cups neutral tasting Oil, like Sunflower or Safflower or Grape Seed
1 cup Brown Sugar
1 teaspoon Vanilla
2 cups Gluten Free Flour
1 teaspoon Baking Powder
1/2 teaspoon Baking Soda
1 teaspoon Salt
1 teaspoon Cinnamon
1 Tablespoon Sugar in the Raw
Heat the oven to 350 degrees. Then scary a loaf pan with Oil.
In a large mixing bowl, mix together the Zucchini, Eggs, Oil, Sugar and Vanilla. In another bowl, mix together the Flour, Baking Powder and Baking Soda, Salt and Cinnamon. Then add to the Zucchini Mixture. Stir to blend and pour into the loaf pan. Sprinkle evenly with the Sugar in the Raw.
Bake for 60 minutes or until a toothpick inserted into the center comes out clean. Let cool before serving. It's even better the next day.
Five Element Analysis
As a Sweet Bread made with Sugar, this is going to be a part of the Earth Element. Zucchini adds even more Earth. It is actually a combination of Earth, since it is a squash, and the Wood Element since it is Green.  The Eggs and Oil (made from Seeds) bring in the Water Element. The Cinnamon, Vanilla, Baking Powder and Baking Soda bring in just a little of the Metal Element and the Gluten Free Flour, made mostly of Rice Flour adds even more So, add this as an afternoon snack with a cup of Tea or Coffee, which brings in the Fire Element. Or, serve it after dinner when you have a Fire food as a main dish, like a Summer Salad.
Posted by Lillian at 5:43 PM No comments: 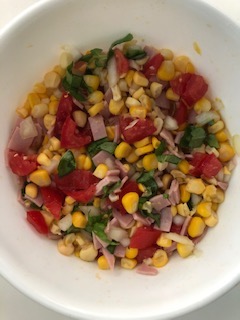 I haven't been cooking much lately because it's been so hot. I've mostly been making Salads, most of which I've posted already. But yesterday I made a Salad Dressing that I really liked that I poured over a Salad made up of cooked, leftover Corn, Green Onion tops, bits of Ham and cut up Tomatoes. The Dressing contained most Lime Juice and Olive Oil with a spoonful of Coconut Aminos, which is a little bit like a very light Soy Sauce and a little minced Shallot too.  It was so good that I thought I would share it with you. Of course, I made it again today to use on a Cucumber Salad and it was also worked and I'm quite sure it would be good on Lettuce as well. If you don't haven any Coconut Aminos  you can substitute Bragg's Liquid Aminos or Tamari, but use a lot less. It's my new favorite Salad Dressing!
Lime Vinaigrette
1/4 cup fresh squeezed Lime Juice
1/4 cup Olive Oil
1 teaspoon Coconut Aminos (or Bragg's or Tamari)
1/4 teaspoon Salt
1/4 teaspoon Sugar
1 teaspoon of minced Shallot (or Red Onion)
Whisk all the ingredients together in a small bowl and pour over the Salad ingredients of your choice.
Five Element Analysis
This Salad Dressing is predominantly made up of Wood Element ingredients - it's mostly  Lime Juice and Olive Oil. So this is a good Dressing to use on the Salad I prepared, as it contained Corn from the Earth Element, Tomatoes from the Fire Element, Shallots and Green Onions from  the Metal Element and Ham from the Water Element. I didn't do that on purpose, but it's wonderful that I ended up eating a balanced Salad!
Posted by Lillian at 6:04 PM No comments: