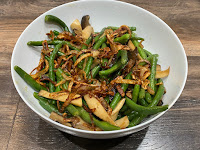 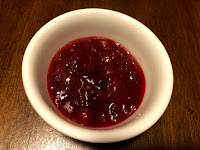 It is Thanksgiving here tomorrow in the US and we've started preparing. My son, Stephen has decided that we are going to do an Asian version of all the standard dishes. So, for the main course, we are having Lacquered Roast Duck with Sticky Rice cooked with Chinese Sausage, Green Onions, Water Chestnuts and Ginger (previous post). For the vegetable, we are making Green Beans with King Oyster Mushrooms and fried Shallots. There will also be an Asian Hasselback Potato dish too and we haven't decided on the other vegetable, but it will most likely be a Cucumber Salad (previous post).

I decided today to make an Asian inspired Cranberry Sauce, a bit more savory than the usual and flavored with Five Spice Powder. I use the Dynasty brand and it is made up of the following warming spices:  Cinnamon, Star Anise, Fennel, Cloves, Ginger, Licorice, Szechuan Pepper and White Pepper. There are obviously more than 5, but the first 5 are the most important. These spices aid digestion and are ubiquitous in Chinese cooking. I've always thought of the popularity of Five Spice Powder in Chinese cooking as the equivalent of Pumpkin Spice in the US, only savory!

To make this Cranberry Sauce, I first sautéed some Shallot, added in some diluted Chicken Broth (or you can use Vegetable Broth), the Five Spice Powder, Rock Sugar and a little Sea Salt too. I used half as much Sugar as is usual and the bit of Salt helps balance it all. The Rock Sugar isn't absolutely necessary, but it is a bit less sweet than either Brown Sugar or White Sugar. I buy the light golden colored Rock Salt and use it for many Asian dishes so it's worth having it around. When using Brown or White Sugar, use just a bit less. I absolutely loved this Sauce and will probably make it every year from now on. Happy Thanksgiving!

Rinse the Cranberries in a strainer and pick out any soft ones and rinse. In a small saucepan, heat the Oil and add in the Shallots. Cook, stirring often until you can smell their fragrance and then add in the Cranberries, Broth, Rock Sugar, Salt and Five Spice Powder. Bring to a boil and reduce to a simmer. Cook until the Cranberries pop and the sauce thickens, about 10 - 15 minutes. Cool and refrigerate until ready to use.

Cranberries, with their bright red color, belong primarily to the Fire Element. But they are also very tart, which contributes the Wood Element and the Broth adds even more. The Shallots and Five Spice Powder make sure the Metal Element is present and the Rock Sugar makes sure the Earth Element is there too. Only the Water Element is missing, which can easily be found in one of the other dishes on the table and is why this sauce is perfect for Duck! 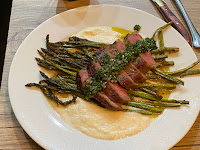 Turnips are not considered a very exciting vegetable, but I want to champion them a little. I wrote a previous blog post about Turnip Fries that I know a lot of people have liked and today I want to give Turnips just a bit more respect by showing you how great they are as a base for the rest of the plate. Pictured is Stephen's version of Asparagus and Steak with Chimichurri Sauce plated over Pureed Turnips. I made the same Turnips, but I topped it with Salmon and Peas. And unfortunately, I forgot to take a photo.

Like Mashed Potatoes, cooked Turnips have a very mild flavor that doesn't interfere with the other flavors of the dish. They are also very nutritious. I cooked them in Chicken Broth, although Vegetable Broth is good too and then mashed them with a Potato Masher and of course added a couple of Tablespoons of Butter. So, I should probably call my version Mashed Turnips. Stephen made his silkier by putting them in the Cuisinart. And these Turnips are so easy to make. You can add Broth back in if you need to make the Puree smoother and thinner, but I didn't need any. There will be extra broth left over, which is great for soup. Either way you make them, I think you will be surprised how good Pureed Turnips taste!

Pour the Broth into a medium pan. Add in the Turnips and bring to a boil. Reduce heat to a simmer and cook for 20 minutes. Remove the Turnips from the pot, reserving the Broth.

Ad Butter to the Turnips and mash a fork or potato masher or put into the food processor. Add in a little broth if necessary. Plate as the base layer for your other foods or eat as is!

Posted by Lillian at 4:26 PM No comments: 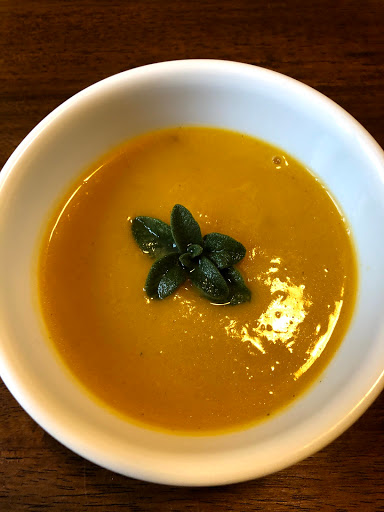 I was out looking at my container garden and realized that I had lots and lots of Sage and hadn't cooked with it at all this year. Of course, I will use some for Thanksgiving, but really felt like I needed to make something with it today. I had a Butternut Squash sitting on the counter and decided to make a soup that has the flavors of Butternut Squash Ravioli with Brown Butter and Sage. I put the Butternut Squash in the microwave first for a few minutes to make it easier to cut and then after I cut it and scooped out the seeds, I roasted it for 45 minutes. This is best done ahead of time and you can store the cooked Squash in the refrigerator until you are ready to use it.

When I was ready to make soup, I lightly browned some Butter in a soup pot and added in some Shallots and Sage until they were soft and the Butter was even more golden brown. I pulled out the Sage leaves and then added in some diluted Chicken Broth and cooked it all together for only 20 more minutes. You might need to add more Broth if you have a bigger Butternut Squash. After that, I pureed it with a stick blender and added in a teaspoon of ground Sage and stirred it in. It was so good!  Creamy and smooth with a wonderful savory note from the Sage and a lovely nutty flavor from the Browned Butter. I thought about serving it with some cooked and crumbled Breakfast Sausage or some minced Ham, but it was just so good the way it was. And you could also reimagine this as a pasta sauce too. This is going to become a new favorite!

2 large Shallots, minced or about 1/2 cup of minced Onion

Optional for Serving: 1/2 cup Breakfast Sausage, cooked and cut up if links or cooked and crumbled or 1/2 cup minced Ham

Heat the oven to 350 degrees. Prick the Butternut Squash all over with a sharp knife. Place in the microwave for 5 minutes. Then cut in half and scoop out the seeds. Place on a baking sheet and put in the oven. Roast for 45 minutes. Remove from oven and when cool, peel off the skin and cut in to chunks. Refrigerate until ready to use.

Soup is always considered part of the Water Element, but this one is made with a very Earthy vegetable (really a fruit) that is also a beautiful yellow orange color. If you serve it with Sausage ro Ham,  you add more of the Water Element, as they are both salty meats. The Chicken or Vegetable Broth brings in the Wood Element. The Butter and Sage contribute the Metal Element. Only the Fire Element is missing, so it would be good to serve a salad with it to create a balance or serve at the beginning of a meal that also has other Fire foods in it.

Posted by Lillian at 3:59 PM No comments: