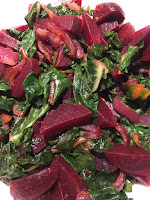 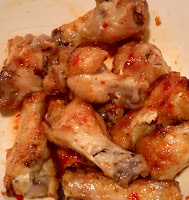 I found a package of Chicken Wings Drumettes in the freezer that needed to be cooked and there was a Seahawks playoff game to watch. I didn't have much time, so I quickly unthawed them and used the technique of broiling the Chicken Wings from my cookbook (coming very soon!) that involved saucing them with a wonderful Apricot Chili Sauce. But I didn't have any Apricot Jam and I remembered that my son had mentioned that the Apricot Chili Sauce tasted a bit like Thai Sweet Chili Sauce and decided to use that as the sauce. I sprinkled the Chicken Wing Drumettes with some Salt and Pepper and broiled them quickly and tossed them with the Thai Chili Sauce. The Seahawks unfortunately did not win but the Chicken Wing Drumettes were delicious!

Heat the oven to broil. Place a sheet of aluminum foil on a sheet pan. Place the Drumettes on the foil and space evenly. Sprinkle with the Salt and Pepper.

Broil for 10 - 12 minutes on one side or until golden and then turn and broil on the other side. Remove from the oven and place in a serving bowl.  Pour the sauce over and toss thoroughly.

Chicken belongs to the Wood Element. The Chilis in the Sweet Chili Sauce add the Fire Element and the Sugar in the sauce contributes the Earth Element. The Metal and the Water Element need to be added and we did that by serving an Asian inspired Eggplant Dip with Rice Crackers to create some Five Element balance.

Posted by Lillian at 6:17 PM No comments: 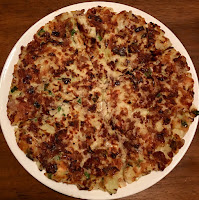 I usually make something each year that symoblizes good luck on New Year's Day and almost all of them involve greens or round foods. So, I decided to make Okonomiyaki, which is a Japanese Savory Pancake - it's round and it's full of Green Cabbage. It's one of those foods that I am very fond of due to my childhood in Japan and I wanted to make a Gluten Free version. It turned out to be remarkably easy!

I used chopped Green Cabbage, sliced Green Onion and  a little bit of ground Pork seasoned with Tamari and Mirin.  I made a batter out of a Gluten Free flour blend that included Xanthan Gum (Cup4Cup) and mixed it with Chicken Broth and an Egg. It's usually made with a Dashi Broth, but I am all out of Bonito Flakes. Cooked in a frying pan, it only takes about 20 minutes. I brushed it with a mixture of Bulldog Fruit and Vegetable Sauce, which is a Gluten Free version of Katsu Sauce mixed with Kewpie Mayonnaise. It was so good and I'm happy it is a lucky food too!

For Sauce: mix together 1-1/2 Tablespoons of Bulldog Fruit and Vegetable Sauce and 1 Tablespoon of Kewpie Mayonnaise

In a small bowl, mix together the Pork, Tamari and Mirin. Mix to blend thoroughly. In a larger mixing bowl, combine the Cabbage, Green Onions, Gluten Free Flour Blend, Chicken Broth and Egg. Stir to combine.

Heat a 10" nonstick frying pan on medium heat and add in the Pork. Cook until no longer pink. Remove from the heat and blend the Pork into the Okonomiyaki batter. Then heat the Oil in the same frying pan and pour in the batter. Press down lightly with a spatula. Cover and cook for 7 - 9 minutes or until the bottom is browned when you lift up the edges. Place a plate over the pan and turn over carefully. then slide the Okonomiyaki back into the pan (uncooked side down) and cook for an additional 7 - 9 minutes. Wash and dry the plate and then slide the Okonomiyak onto the plate. Brush with the sauce mixture and cut into 8 pieces to serve.

Cabbage belongs to the Earth Element. The Green Onion and Rice Flour in the Gluten Free Flour as well as the Mayonnaise contribute the Metal Element. The Chicken Broth adds the Wood Element and the Pork and Egg bring in the Water Element. and the Bulldog Fruit and Vegetable Sauce, being Dark Brown adds a little more. Only the Fire Element is missing so be sure to serve this savory snack with some Green Tea!

Posted by Lillian at 6:29 PM No comments: