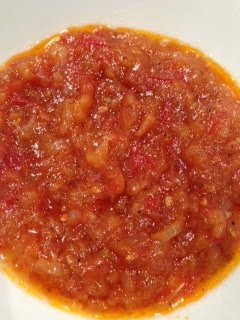 I have been in Australia and just finished up teaching. After having eaten out so much, I decided that I desperately needed to cook and luckily, I am staying in a lovely apartment in Melbourne and so I made dinner tonight so I finally have something more to post.

One of the condiments I have enjoyed most during my Australian lecture tour has been the various Tomato Chutneys I have had with eggs and burgers. Tonight I made my own with the help of my son and it turned out fantastic. We used a large Tomato and some Dates with Shallots as the base note, Dates as the major sweetness and Lemon Juice as the top note.  We ate it with a steak and it was the star of the dinner! I wanted to lick the bowl.... I will definitely be making this again. It had just the right sweetness and bright tartness to make the meal. I encourage you to try this one. It made just enough for three steaks and we didn't have any left over or I definitely would serve it again with some eggs tomorrow morning. Next time I will make a lot more - it's that good!

In a small frying pan, melt the butter and add in the diced Shallot. Cook until soft. Then add in the Tomato and Dates and stir.  In a small measuring cup, mix together the Chicken Bouillon with the Hot Water and Sugar and stir to combine. Add to the Tomato/Date mixture.  Bring to a boil and reduce heat to a simmer. Cook for 30 minutes, stirring often or until the Chutney thickens.  If it gets too thick add more Water one Tablespoonful at a time. Serve over Steak, Burgers, Grilled Fish or Eggs.

Tomatoes belong to the Fire Element and the Dates and Sugar bring in the Earth Element.  The Shallot contributes the Metal Element and the Chicken Bouillon adds in the Wood Element.  Only the Water Element is missing, which is why it would be so great with Eggs or Fish to create a Five Element balance.

Posted by Lillian at 3:33 AM No comments: 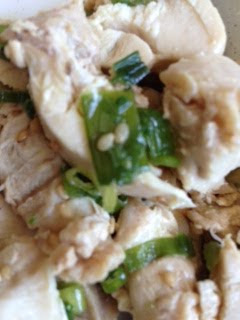 I haven't been posting lately because I haven't been cooking as I am on a lecture tour in Australia. But I had a day off today before teaching tomorrow and wanted to post a dish I made right before I left. I made it for my Mother as I try to encourage her to eat more and this is one of her favorites.

This is a very simple Japanese Salad of Chicken, poached in Chicken Broth for more flavor and then seasoned with a sauce of Scallions and Sesame Oil along with Sesame Seeds. It makes for a delightful lunch served with some other vegetables. I usually serve this with a side of a cucumber salad.

In a small pot, heat the Chicken Broth to boiling.  Add in the Chicken Breast and lower heat to a simmer. Cook for 20 minutes covered and then turn off heat and let sit until cooled down.

When cool, remove from the broth (save for another use) and cut the chicken into bite size pieces. Place on a plate.

In a small frying pan, heat the 1 Tablespoon of Vegetable Oil and add in the Green Onions and cook until wilted. Add in the Sesame Oil, Ponzu (or Lemon Juice) Salt and Pepper.  Stir  to combine thoroughly and pour over the Chicken. Sprinkle with Sesame Seeds and serve.

Chicken and Chicken Broth belong to the Wood Element and the Ponzu adds even more. The Sesame Oil and Sesame Seeds contribute the Water Element and the Green Onions bring in the Metal Element.  The Fire Element has only the tiniest bit of Black Pepper to represent it so that Element needs to be found in the rest of the meal and Earth Element is missing. That's why I served it with a Cucumber Salad that had Red Chili in it to create a Five Element balance.

Posted by Lillian at 3:47 AM No comments: 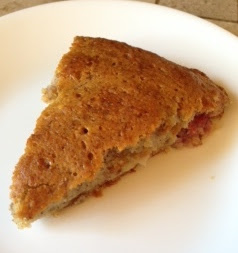 I really like Gluten Free Cakes made with Almond Flour, probably more than using replacement flours. Almond Flour is commonly used to make cakes in Spain.  The texture of this cake certain has a kind of moistness and creamy crumb that is very satisfying for those of us who want to be Gluten Free and is still totally appealing to everyone else too. Today I made a cake with Strawberries and Bananas in it. I also used Honey instead of sugar and I was so pleased with how this cake turned out. I was baking it while my carpets were getting cleaned and it smelled so good that I gave the technician a piece and he loved it. I am so pleased with this combination of two fruits and it was perfect for a delicious afternoon teatime!

Heat oven to 350 degrees and butter a cake pan.  Combine the Almond Flour, Baking Powder, Cinnamon and Salt in a large bowl. In a separate smaller bowl, mix together the Melted Butter, Honey, Eggs and Vanilla. Then add to the Almond Flour mixture and stir to combine. Fold in the Banana and Strawberries and pour into the cake pan. Bake for 40 to 45 minutes or until the top is Golden Brown and a toothpick inserted in the center comes out clean.

Like all sweet desserts, this cake belongs to the Earth Element and the Honey and Banana and Almond Flour make it really Earthy. The Strawberries contribute the Fire Element and the Eggs bring in the Water Element.  The Cinnamon and Vanilla make sure that the Metal Element also has a presence. The only Element that is missing is Wood, so this is a good dessert to serve with a meal with a lot of the Wood Element in it.

Posted by Lillian at 5:18 PM No comments: 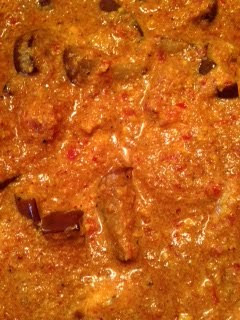 Although I want to make authentic foods from the regions of the world they come from, I sometimes have to adapt ingredients because of my food intolerances. Indian food is one of the cuisines that I love, but I need to be careful not to eat it too often because of all the Yogurt and Cream that is used. So, the other night I took a recipe for Indian Chicken and used Coconut Milk instead and I loved it.  The recipe was from my friend Deirdre who is an amazing cook and she is especially good with Indian food. This dish involves marinating Chicken overnight in Yogurt (although I used Coconut Milk) combined with Indian spices and Lemon. The next day, I baked the Chicken and then added it to a sauce that I made with the rest of the Coconut Milk along with canned Tomatoes and Indian Spices. I thickened the sauce with Almond Flour.  I also added slices of Asian Eggplant and it was divine!  I served it with Buttered Basmati Rice and couldn't eat enough!  This recipe may not be authentic, but it delicious - rich and creamy and exotic with spices. If you'd rather use Yogurt, of course you can and it will be much more authentic, but I'm going to make this dish over and over again just this way!

Mix marinade in a food processor or blender and combine with the chicken in a container that seals. Place in the refrigerator for several hours or overnight.

The next day, heat the oven to 350 degrees. Remove the chicken from the refrigerator and pour into a baking dish. Bake for 20 minutes and remove.

Heat a frying pan and add the Ghee. Then add the Eggplant and sprinkle with the Salt. Cook until the Eggplant is soft, turning frequently and add to sauce.

Heat Ghee in a large frying pan and add the Onion and Garlic and Spices.  Cook until the Onion becomes translucent and soft.  Then add in the Tomatoes, Coconut Milk, Eggplant and Salt, bring to a boil. Then add in the Chicken and the strained juices from the pan and turn the heat down to a simmer. Cook for 10 minutes then add in the Ground Almonds to thicken. Serve with buttered Basmati Rice.

Chicken belongs to the Wood Element, so that element is covered. The Tomatoes and Cayenne contribute the Fire Element. The Eggplant brings in the Water Element and the Coconut Milk makes sure the Earth Element is present as well. And finally, the Spices, Cilantro and the Rice add in the Metal Element. This ends up being a balanced Five Element dish!

Posted by Lillian at 1:24 PM No comments: 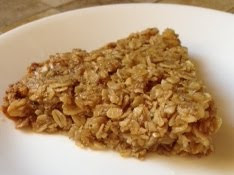 I am an avid reader and I have been all my life. There was a period of time when I read a lot of novels set in England and I kept reading about Flapjacks being served in bakeries. I was very puzzled until one time I asked my English friend why they served Pancakes in a bakery. She explained that it was actually like a cookie, most likely the first energy bars made and they are very sweet and delicious!  So I tried them and of course got the recipe. They consist of Oatmeal, Golden Syrup - which is made from Cane Sugar, Brown Sugar and Butter. I added a pinch of Salt to balance the flavor. They are perfect for people who are eating Gluten Free and still need a sugar fix. You bake them in the oven for about 25 minutes and let them cool as they come out very soft. I only make a small amount at a time, but this recipe can easily be doubled. There are also all kinds of ingredients you could add in like dried fruit, nuts and seeds. Flapjacks are wonderful with a cup of tea and taste like a bowl of sweetened Oatmeal in a cookie!

Heat the oven to 350 degrees.  In a mixing bowl, combine the Butter, Salt, Brown Sugar and Golden Syrup.  Stir until blended thoroughly.  Then add in the Rolled Oats and stir to combine.

Pour into a small baking dish or cake pan (5 - 6 inches across) and pat down, smoothing the top with the back of a spoon. Place in the oven and cook for 25 minutes or until Golden Brown in the center (the edges will be darker). Cool before cutting into wedges or squares or triangles to serve.