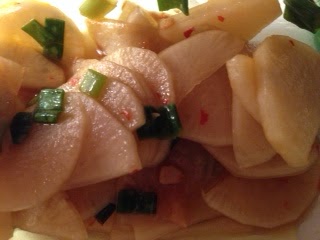 I tend to lose my appetite when it's really hot outside and Seattle has had a very hot summer! So, I tend to eat a lot more raw food, usually in the guise of salad and one of the salads I keep making over and over is this really simple little Daikon Radish Salad. Now I suppose you could use any kind of radish, but I am partial to the long white Daikon because you just get so much more of it without having to trim as many ends and also because all of the pieces are a similar size and that kind of symmetry just makes me happy. Anyway, I buy about a 10 inch long Daikon on a regular basis but I keep forgetting to post this salad so finally I am going to give you this recipe. Basically, you just peel and trim the Daikon and then slice it into thin little slices, add some green onions bits and dress it with a dressing made of Tamari, Chili Ginger Sauce and a bit of salt. That's it.

I was especially happy because my son and daughter in law just gave me a tiny Shun Santoku knife that was super sharp so slicing the Daikon was a joy. Of course I remembered to give them some money for it - just some spare change - so that it wouldn't cut our relationship. I can't wait to use it so you will be seeing a lot more vegetable recipes in the near future. This salad was a hit with them too and I have to admit that it was even better the same day, but only a little bit was left over.  Radishes have that wonderful bracing bite to them - something I think that is like smelling salts - it wakes up your taste buds and then it gets even more exciting with the chili. But the radishes also get softer in both texture and taste due to the Tamari and salt. I love it and I've been eat ing it a lot - hope you love it too!

Put the Radish into a bowl and mix in salt. Let sit for about 15 minutes and then drain off the water. Add in the Tamari, Chili Sauce and Green Onions. Serve immediately or refrigerate until later up until 24 hours later.

Radishes belong to the Metal Element as they are very pungent and they are white and the green onions add even more so this is a primarily Metallic dish. The Tamari and salt add the Water Element and the Chili Garlic Sauce adds some Fire. The Earth and Wood Elements are missing so be sure to serve a Main Dish and some other sides that are part of these elements to make a balanced meal.