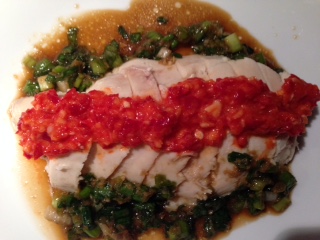 Since I wrote about the fresh Chili Garlic Sauce that I used on my Hainan Chicken, I figured I had better give you the recipe for that as well.  Hainan Chicken is a really popular dish in Singapore and it's a great way of getting lots of soup and tender chicken and delicious rice that you cook in the broth. I grew up with a variation that is called White Cut Chicken and it is still one of my favorite ways to cook chicken. The secret is to only boil it for a very short  time and then take the chicken off the heat and leave it covered to steam for 40 minutes longer. You then remove the chicken and let it cool completely and then you cut into bite size pieces. Now, traditionally you use a cleaver and hack through the bones to cut the chicken up, but I like my chicken boneless, so I take the meat off the bones in pieces as big as possible and then cut it up. Of course, the breast meat looks the best as it comes off in one big chunk and if you slice it partially sideways, it makes for a great presentation.

The usual sauces that are served with Hainan/White Cut Chicken are the Chili Sauce that was my last post and also a Soy Sauce and Vinegar with Scallion Sauce and also a grated Ginger Sauce - basically grated Ginger and Salt. To make it easier, I mix it all together. It's very similar to the sauce made famous by Momofuku, but really, that recipe is pretty classic  to most Asian cuisines and I don't really think you even need to measure. I've included my version below. It is shocking how good this plain chicken tastes with these sauces and if you serve it with rice that has been cooked in some of the leftover chicken broth, you have a fabulous meal. I like to serve it with a Cucumber Salad. The chicken is so tender and the sauces are so savory and pungent - this dish is a delight for your tastebuds!

Take 1 Tablespoon of Salt and Rub it all over the skin of the chicken. Then place it into a big pot and add enough water to come up to cover most of leg and thigh, leaving the breast uncovered.  Bring to a boil and reduce to a simmer, cover and simmer for 20 minutes. Then turn off the heat, push the pot over to an unheated part of the stove and let sit for 40 minutes.  Then take out the Chicken and cool.  Strain and taste the broth and add additional salt. Use the broth to make rice to serve with it and save the rest for soup.

When the chicken is fully cooled, pull the meat off the bones in as big chunks as you can. Cut into bite size pieces.  Serve with Chili Sauce and Tamari, Scallion, Ginger Sauce.

Mix together and let sit for at least 15 minutes to let the flavors meld. It will hold in the refrigerator for up to 3 days.

Chicken belongs to the Wood Element so that element is covered and the way of cooking this dish is very Watery.  The Tamari and Sesame Oil add even more of the Water Element. The Scallions and Rice add the Metal Element and the the Chili Sauce contributes a good amount of the Fire Element. The Ginger contributes the Earth Element and the Cucumber Salad I served it with adds even more, making this a balanced Five Element meal!