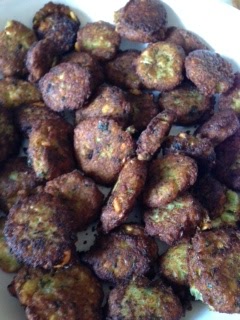 When I was in college at UCSB, I used to ride back on my bike from school to Isla Vista and often I would stop at a wonderful little Falafel stand with my friend Doug, who was a vegetarian. I grew to love Falafel and when I was in Israel earlier this year, I went from one "best" Falafel place to another in Tel Aviv sampling as many as I could and they were all amazing. And although they are quite easy to make, I don't make them very often and I don't know why - they are quite easy to make. They used to be one of my favorite appetizers to bring to a party with a big bowl of Tahini to dip them in. I got in the mood for them today and I didn't have any dry or canned Chickpeas. But, I did have a bag of dried Fava Beans that I picked up at a Middle Eastern market a few weeks ago. Some people of Middle Eastern descent have an allergy to Fava Beans and that's why they converted to Chickpeas in Israel.  Luckily, Fava Beans are one of the foods I am not allergic to. So, I decided to use them instead, as this is the ingredient of choice in Egypt. I started by soaking the beans overnight but by the time I got to them, it was nearly 24 hours. And, I used the usual Falafel spices - Cumin and hot red pepper - in this case, I used dried Aleppo Pepper. I based the recipe made them gluten free by using gluten free flour to thicken them up.  They turned out wonderfully and they were lighter in taste and color than the Chickpea version. I absolutely loved them and luckily I made a lot. I served them with Tahini (see previous post) and my son concocted a Harissa Ketchup to eat them with - basically a lot of Harissa with a little Ketchup to sweeten and temper the heat. They were so delicious that I will definitely be making them again many times!

Put the drained Fava Beans in the Cuisinart (can also use a Blender or Stick Blender) with the Lemon Juice, Onion, Garlic, Parsley and Cilantro and process unit it is a coarse paste.  Remove to a bowl and add in the Salt, Aleppo Pepper and Cumin. Stir in the Gluten Free Flour and the Baking Powder.

Heat a few inches of oil in a frying pan (I used my Wok) and heat oil until hot. Make small balls of the mixture and drop carefully into the hot oil, turning and pressing down slightly and cook until dark brown on both sides.  Remove and place on paper towels.  Repeat but let the oil heat back up again for a few moments between each batch.

Serve with Tahini Sauce or Harissa Ketchup or put into Pitas. They can also be reheated in the oven.

Beans of all sorts belong to the Water Element, but frying is a Fire Element cooking method so both Water and Fire are covered in this dish and the dipping sauces add even more Water from the Sesame Seeds in the Tahini and Fire from the Ketchup and Harissa. The Onion, Garlic, Cilantro and Parsley along with the Gluten Free Flour all contribute the Metal Element. The Wood Element is represented by the Lemon Juice in the Falafel and also in the Tahini Sauce and the Earth Element is missing. So, be sure to add a bit more Wood and a lot more Earth in the same appetizer spread or at a later meal to find balance.