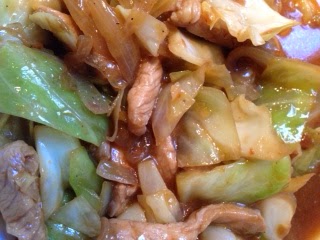 Tonight, I made a dish that reminded me of my childhood - Hui Gou Rou or Twice Cooked Pork.  This was one of my father's favorite dishes and my mother would make it whenever she felt like pleasing him.  Now, back then, I thought it was a bit too spicy, but these days, it seems pretty tame. This recipe traditionally uses pork belly first boiled and then sliced thin to be cooked again another day. I did something a bit different. I used leftover pork chops from the night before, sliced them thin and then sautéed them with onions and cabbage and seasoned the dish with Soy Sauce, Hoisin Sauce and Chili Bean Sauce. I thought about adding green peppers as is sometimes done, but I would have just picked them out and sometimes I add red peppers or  green onions or leeks instead of the onions - the choice is yours. This dish comes together in only minutes because the meat is already cooked. Served with some rice, it makes a lovely lunch. For a Chinese dinner, it is a good choice as one of several dishes as it has a very distinctive taste.

Heat a wok or large frying pan and add in the oil.  Then put in the onion and cabbage and cook, tossing until just beginning to brown. Then add in the pork, the Chicken Broth, the Soy Sauce or Tamari and the Chili Bean Sauce.  Stir and bring to a boil and cook until the meat softens (only a few minutes).  Mix in Cornstarch slurry and stir until slightly thickened.  Serve immediately.

Pork belongs to the Water Element and the Soy Sauce, Chili Bean Sauce and Hoisin Sauce all add even more water. The Onion contributes the Metal Element along with the Rice and the Cabbage brings in the Earth Element. The Wood Element is represented by the Chicken Broth. The Chili Bean Sauce also brings in the Fire Element although this is the one element that could use some support. So add the red peppers in or pass some extra chili sauce on the side or serve with tea to make this a balanced delicious little dish.