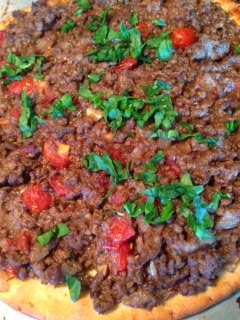 I used to go to these wonderful Armenian Delis in the San Fernando Valley when I lived in LA and I would buy Lahmacun and go home and heat them up in the oven as a midnight snack. I never had them fresh out of the oven and I've always wanted to make them so I did. For those of you who have never had a Lahmacun, they are like pizzas but with no cheese. They are usually made with ground lamb, tomatoes, onion and spices and there as many variations with the seasonings as there are Armenian cooks. This dish originates in Gaziantap, which is now part of Turkey and so this is a popular snack food in Turkey too. Today, I got a sudden craving for them but I didn't have any lamb and I'm back to not eating gluten for a while, so I made it with ground beef and Udi's gluten free pizza crusts instead. You could use any prepackaged pizza dough if you don't feel like making it yourself. As you can see from the photo, I put a lot more meat on - about double the usual amount - because I love the meat and I've always wished there was more on the more traditional Lahmacun. It turned out so wonderfully that I will be making these a lot more. It's a delightful snack with a delicious and a slightly exotic taste.  I don't know why I  never made it before, but I will definitely be making this much more from now on!

In a large frying pan, heat the olive oil and add in the chopped onion and garlic.  Cook until just beginning to brown.  Put in the ground beef and cook until it is no longer pink.  Add in the Tomatoes and the Tomato Paste.  Season with salt, Paprika, Allspice and Red Chili Flakes and then cook until bubbling.  Turn off the heat and let cool until ready to use

To Make the Dough:

Combine sugar, yeast, and ¾ cup water in a small bowl and let sit until foaming. Mix flour and salt and add the yeast mixture and stir to form a dough. Transfer dough to a lightly floured surface; knead until smooth. Then put dough into a lightly oiled bowl and cover with plastic wrap. Let dough rest until doubled in size - about 1 hour. Divide dough into 2 portions, and roll each portion into a circle.  Then, place on an oiled baking sheet and put on topping.

Or use 2 Udi’s Gluten Free Thin & Crispy Pizza Crusts for a gluten free version like I did.  Place the pizza crusts on the on the oiled cookie sheet and put on the topping.

To Make the Lahmacun:

Heat the oven to 400 degrees. Use 1/2 of the meat mixture and spread it over the top of a dough round – covering all of it almost to the edges.  Repeat for the second Lahmacun. Then, place them in the oven on a middle rack and cook for 15 – 20 minutes or until crust is browned and meat sauce is bubbling.  Remove from oven and sprinkle with parsley.  Serve with additional red pepper flakes.


If using beef, it supplies the Earth Element and the Udi’s Gluten Free Pizza Crusts contribute the Metal Element as they are made from Rice and Tapioca Flours. The olive oil contributes the Wood Element. The Tomatoes and the Tomato Sauce and the Red Chile flakes bring in the Fire Element and the Garlic, Parsley and the spices add plenty of the Metal Element. The Earth Element is covered by the browned onions. Only the Water Element is missing, so making an accompanying Eggplant dish would create balance or  a dish that involves some nuts or seeds.  One idea is to sprinkle it with Pine Nuts before serving  If you make this with lamb, it is considered a Fiery food and the Wheat Crust brings in more of the Wood Element.