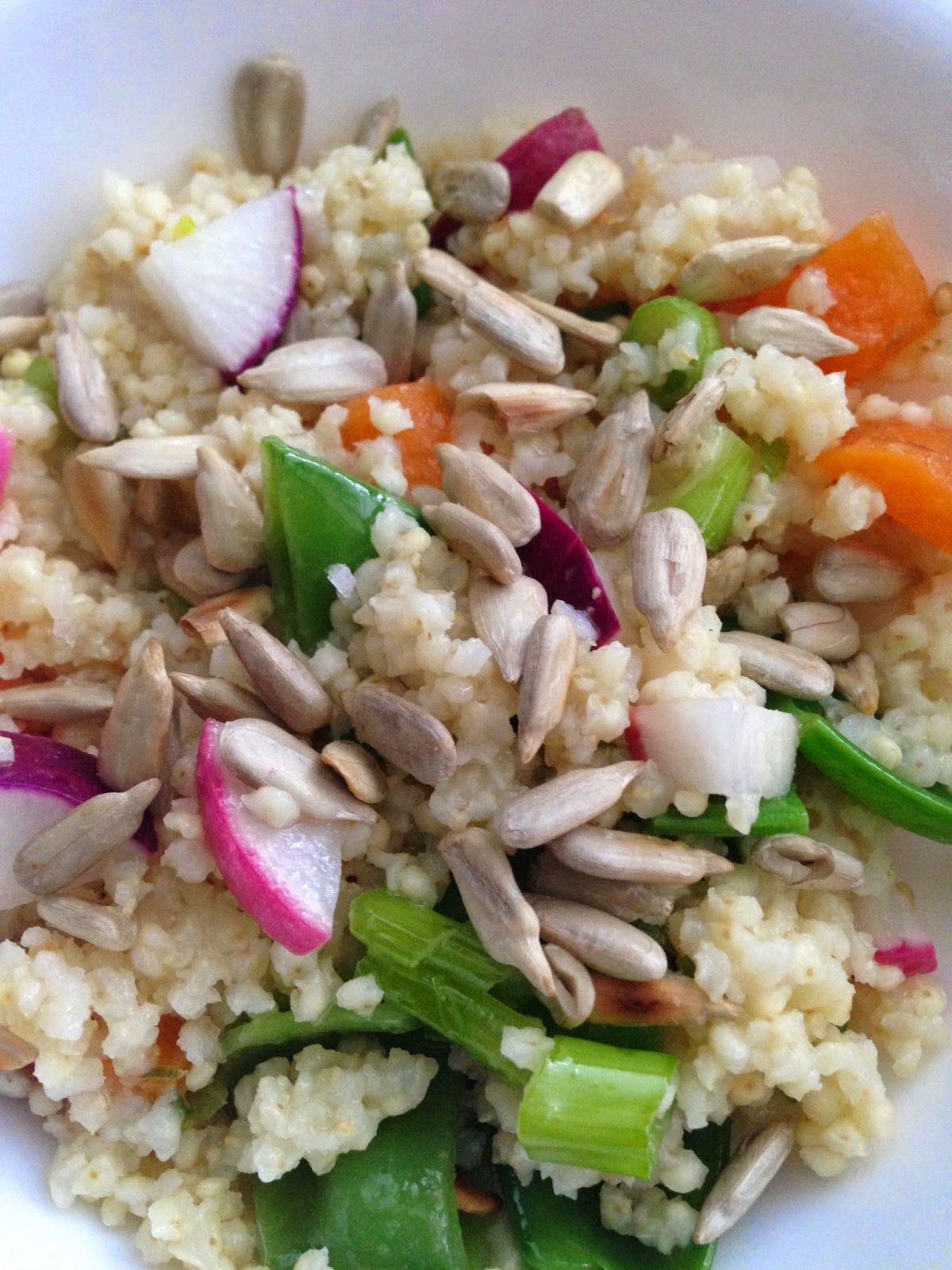 When my son was very small, he was quite intrigued by birds and we had a bird feeder that he maintained in our back yard. He asked me one day if I would make him something out of birdseed so he could taste what the birds were eating.  I recognized only two things – millet and sunflower seeds and I ended up cooking some millet like a cereal, adding some sunflower seeds on top and serving it to him with butter and maple syrup. He loved it and it became one of our favorite breakfast foods. Over the years, I’ve thought about making millet again as it is a gluten free grain and I don’t know why I don’t because it is so delightful – nutty and chewy and easily digestible. It’s quite popular in the North of China where some of my ancestors come from. It is said to have been the grain that nourished countless Chinese armies.

According to Chinese Medicine, millet nourishes Yin and supports the spleen. It nurtures the liver and helps increase blood production, so it’s good for you too. It’s much like quinoa but I think it is more flavorful.  So tonight I decided to make a salad with it and in honor of my son, I added sunflower seeds too.  A friend just gave me the remnants of his CSF box and I had an assortment of fresh green onions, pea pods and radishes to use.  So, I toasted the millet and then steamed it in some diluted chicken broth (use water if you are vegetarian or vegan), lightly blanched the pea pods and the carrots and chopped up the green onions and radishes. I tossed it together with a light dressing made of coconut oil, lime juice and honey. Then I sprinkled it with sunflower seeds. It was so good!  You could add any number of vegetables to this salad – I think it would be great with some tomatoes or red or yellow peppers or some celery.  I also discovered that this salad keeps well. Just remember not to add the sunflower seeds until just before serving to keep them crunchy.  This would be a great salad to bring to a potluck and can easily be doubled or tripled to serve a lot of people and it would introduce them to a virtually unknown grain that deserves some attention.

In a frying pan, toast the millet over medium high heat for 5 -7 minutes or until lightly golden brown.  Add the chicken broth and cover and cook for 20 minutes.

Meanwhile, bring a small pot of water to boil and add the carrots and peapods. Cook for 3 – 4 minutes or until the peapods are tender but still crisp. Drain and add in cold water to stop the cooking process. Then, cut into small pieces

In a large bowl, put in the radishes and green onions.  Add in the coconut oil, lime juice and honey.  Mix in the peapods and radishes and any other vegetables you are using.  Then add in the hot Millet and toss to coat (it melts the coconut oil).  When ready to serve, sprinkle on the sunflower seeds.

Millet, as a yellow grain, belongs to the Earth Element and the Coconut Oil, carrots and honey add even more.  The chicken broth, lime juice and peapods contribute the Wood Element.  The green onions and radishes add the Metal Element and the Sunflower Seeds bring in the Water Element. Only the Fire Element is missing so this salad would be even better with Tomatoes or Red Peppers, but I didn’t have any so I ate it with tea – a fire beverage – instead.  Or you could serve it with a Fire meat like lamb or venison.