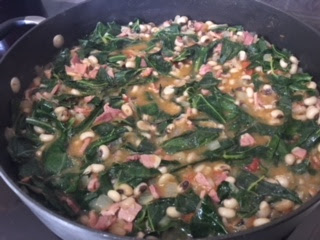 There are many foods that are considered lucky on New Year's Day. Most of the dishes involve eating something that symbolizes money.  I save all my Chinese ones for Chinese New Year that usually occurs in early February. So for the Gregorian New Year that falls on New Year's Day, I tend to serve Hoppin' John, which is a classic Southern dish of Black Eyed Peas, Greens of some sort - I used Collards. As you can guess, the Greens symbolize the color of American money and the Black Eyed peas are supposed to be symbolic of Coins.  I use Country Ham although a smoked Ham Hock is probably the most traditional meat in this dish, although Smoked Sausage or Bacon are also both really good.

Hoppin' John is most often served with Rice or Rice is cooked with the Black Eyed Peas. But, I like to make my Rice separately, so it won't too soggy in the delicious broth and then I pour it over. Hoppin' John is a relatively easy dish to make, especially if you used canned Black Eyed Peas, but with a Pressure Cooker, they cook in about 30 minutes and the rest of the dish comes together pretty fast.I also use Chicken Broth and for those of you out there who are vegetarians or vegans, this recipe works beautifully without the meat and with Vegetable Broth.  I also added several cut up Roma Tomatoes to make the broth even more flavorful. I'm quite sure to some people, this would less traditional, but it makes this dish even more delicious - you can eat it anytime and if you want to make it into soup, just add more broth.  Happy New Year!

In a large frying pan with high sides (or medium size pot), put in Oil and heat over medium high heat. Add in the Onions and cook until they become translucent. Add in the Ham and Tomatoes.  Then add in the Collard Greens and cook until the Collard Greens are softened. Next add in the Black Eyed Peas and the Chicken Broth. Bring to a boil and reduce heat to a simmer. Cook for 15 - 20 minutes and serve over hot Rice and Cornbread on the side..

Place Rice in a small pot and pour water over. Add Salt and Butter. Bring to a boil over medium high heat.  Turn down to a low heat for 20 minutes. Fluff with a fork before serving.

Black Eyed Peas are a bean and so belong to the Water Element. The salty Ham adds even more Water. The Chicken Broth contributes the Wood Element and so do the Collard Greens.  The Fire Element is represented by the Tomatoes. The Rice and Onion make sure that the Metal Element is present. Only the Earth Element is missing, so be sure to make some Cornbread to go with it!