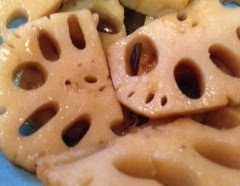 I bought a great, big multi-sectioned piece of Lotus Root the other day and decided to braise it. Normally, I add it to a big pot of simmering Pork Belly in the last 1/2 hour of cooking time, but last night I decided just to braise it by itself as one of several side dishes. This is a common technique for cooking Lotus Root in many Asian cultures. The Lotus Root is actually it's underwater stem and is crisp and crunchy when raw, used in salads, and become starchier when cooked longer. I like to do a quick braise of Lotus Root that takes about 20 - 30 minutes to preserve some of the crispness of this wonderful vegetable. If you like it softer, just cook it longer and it becomes more like Potatoes. The braising liquid is a simple combination of Tamari, Rice Wine and Chicken or Vegetable Broth and the flavorings are Ginger, Green Onion and Brown Rock Sugar or Brown Sugar. That's it! This is such a delicious vegetable and it is considered very cooling and good for the lungs. That makes it a tasty good for you food!

In a pot or large high sided frying pan with a lid, mix the Broth, Tamari, Rice Wine and Sugar. Bring to a boil and add in the Green Onions, Ginger and Lotus Root. Add in the Lotus Root and bring back to a boil. Cover and reduce heat to a simmer. Cook for 20 - 30 minutes, basting the top Lotus Root pieces and turning them over about half way through. Turn off and let cool in the braising liquid or refrigerate until ready to eat. The longer it marinates, the darker it will get.  Sprinkle with Green Onion tops and Sesame Seeds to serve.

Lotus Root is considered a cooling food and that's because it is both a Metallic food since it is white and has Water properties since it is grown under water.  The Green Onions and Ginger bring in more of the Metal Element and the Ginger also adds to the Earth Element which is supplemented by the Sugar. The Chicken Broth contributes the Wood Element. The Water Element is present in the Tamari and the Fire Element is brought in by the Rice Wine. This then is a balanced little dish in it's own right!