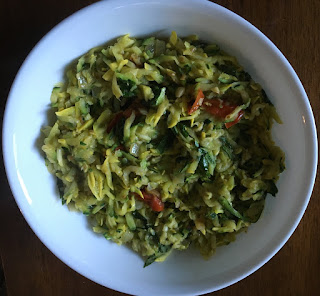 I've been craving Earthy vegetables as I need some grounding when I teach. So, last night, I also cooked some Yellow Squash and Zucchini together and cooked it a little bit like I was making pasta. I know that making Zucchini Noodles is a trendy thing, but I don't have a Spiral Cutter.  So, I grated the the Squashes instead.  I sautéed some Onion and Garlic in Olive Oil, then added a small amount of Cherry Tomatoes and then cooked the Squashes until they were soft. Then, I  added a bunch of chopped Basil. It was so good!  And, it was good or lunch today, even though it was cold. Next time, I might add some more Tomatoes, but I loved the Italian flavors of these two Squashes and it was a really colorful dish too!

Drizzle Olive Oil into a large frying pan. Heat and add the Onions. Cook until translucent and then add in the Garlic, stir until you can smell it's fragrance and add in the Tomatoes. Cook until the Tomatoes soften. Then add the Zucchini and Yellow Squash and cook until soft. Right before serving, add in the Basil and toss to mix.

Zucchini and Yellow Squash both belong to the Earth Element. The Onion and Garlic contribute the Metal Element and the Basil adds a bit of Metal along with some of the Wood Element. The Cherry Tomatoes make sure that the Fire Element is represented. Only the Water Element is missing, so this is a great side dish for Fish or Pork.