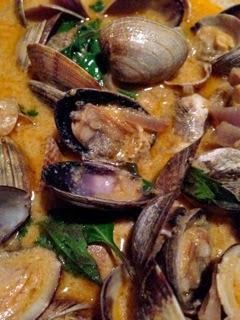 For Chinese New Year, it is very important to cook lucky foods and one of the foods I usually forget to cook are clams. Theyy are supposed to increase the ability to hold onto money, primarily because they have such a strong little muscle that keeps their shells closed.  So last night I made Clams in a Thai Red Curry Sauce for the first day of Chinese New Year.  Coconut milk and Red Thai Curry paste makes a beautiful sauce that goes well over rice.   I had a similar version of this dish at Ray's Boathouse and have been thinking of making something like it ever since.  So, here's my attempt and it was the dish we enjoyed the most at our New Year's dinner - we all drank the broth from the shells, it was that good.  And hopefully, this dish will help make us luckier this year too

In a large pot, cook the garlic and shallot slices in oil until the shallots becomes translucent. Stir in the coconut milk, the chicken broth, the fish sauce, the cury paste and the sugar.  Bring to a boil and add the clams. Cover and cook until the clams open – 3 to 5 minutes.  Remove from the heat and sprinkle with Thai Basil and Cilantro.  Serve with steamed white rice and lime wedges.

Clams belong to the Water Element and the fish sauce adds even more, so that element is fully represented.  The lime and chicken broth brings in the Wood Element. The Red Curry Paste represents the Fire Element, whereas the coconut milk contributes the Earth Element.  The Thai Basil and Cilantro along with the rice make sure that the Metal Element is also present.  So, this becomes a balanced bowl of good luck that’s delicious too!