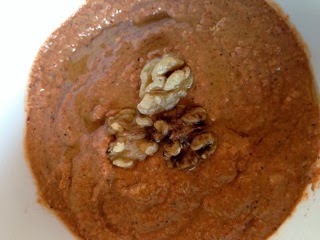 It was my son's birthday today and I decided to make him some of his favorite foods.  He's quite partial to Greek food so we roasted a leg of lamb and made some lemon chicken along with a big Greek salad and some rice pilaf.  But for starters, I made some Hummus, some Eggplant Dip and Muhamarra, which is Roasted Peppers combined with walnuts.  It's a simple preparation that only requires that the peppers are roasted ahead.  Then it's a quick buzz in the Cuisinart and it's ready to go. I adapted this recipe from one I found on Epicurious. I like to make it a little ahead of time to let the flavors meld.  I served it with Pita bread for the wheat eaters and gluten free crackers for me.  This is an amazing dip that if you haven't tried, you need to!  It's incredibly satisfying in some deep primal way. It's one of those foods that you just can't get enough of and I definitely didn't make enough as it was the first to be eaten up.  I'm making it again soon!

Heat oven to 450 degrees. Cut Red Peppers in half and remove seeds. Place skin side out on baking dish.  Put in the oven and cook until the skin is blistered and beginning to blacken.  Place in a bowl and cover with plastic wrap and let rest for 10 - 15 minutes.  Then remove skin and place the peppers in the Cuisinart.  Add the walnuts, olive, oil, lemon juice, Paprika, Sugar, Cumin, Salt and Cayenne Pepper. Blend until smooth.

Place in a bowl and drizzle with reserved olive oil and garnish with a few Walnut halves. Serve with Pita Bread, Pita Chips or crackers of your choice.

Red Peppers, Paprika and Cayenne Pepper belong to the Fire Element and Walnuts represent the Water Element so those elements are covered. The Olive Oil and Lemon Juice bring in the Wood Element. The Earth Element is shown in the small amount of Sugar and the Cumin contributes some of the Metal Element. Although all the elements are present, the Earth and Metal Elements need some support so be sure to serve foods from those elements during the meal.