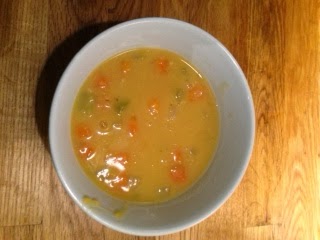 I am teaching my Master Face Reading Certification Shen Module in Copenhagen this week and I have students attending from all over Europe. I make 2 soups every day as I love to feed my students information and food!  It's also quite chilly here and that is soup weather for me.  Since I have several Swedish students, I decided to make Swedish Yellow Split Pea Soup that is served all over Sweden. Of course, it is very similar in every way except color to Green Split Pea Soup and is actually a popular dish in Finland, Denmark, Germany and England too, where several other students are from.  In fact, yellow pea soup was once called "Pease Porridge Hot" in a nursery rhyme.

Dried split peas are a very ancient food. They are considered pulses and are very digestible. I have a fondness for split pea soup because of the restaurant chain - Split Pea Anderson's that my family used to stop at in Buellton, CA.  They served their soup with a spice mix called Cavender's Greek Seasoning that I still like to use on soup. However, I haven't been able to find it here yet, so I am using an herb salt blend as a sprinkle instead. Because I also have several vegetarian students, I used vegetable broth instead of chicken.  If you are not vegetarian, this soup is also good made with a leftover ham bone or if you just add minced ham or crumbled bacon to the soup. I like my soup a little on the thin side, but many people I know like it very thick. Just add extra water if you like it the way I do.

This is a comforting meal that I think is best served with bread and soft butter. I've decided that the yellow color is more appealin to me,  but it tastes just as good if you use the green split peas instead.

In a large soup pot, melt the butter and add in the onion, carrots and celery.  Cook until the vegetables are wilted. Add in the Split Peas and the Vegetable Broth. Bring to a boil and then turn down to a simmer.  Cook for 1 hour, adding water if necessary.  Check seasoning and add salt and pepper.  Add ham if using and cook for an additional 15 minutes.

Although soup is primarily considered a Water Food, so that element is covered and serving it with Bacon or Ham increases that element.  Split Peas belong to the Earth family and the thickness of this soup increases it's Earthiness as do the carrots.  The onions bring in the Metal Element along with the aromatic Bay Leaf and Thyme and the celery, Vegetable Broth or Chicken Broth contribute the Wood Element. Only the Fire Element is missing so be sure to serve it with a Fire Food, in our case we also served a lettuce salad to create a Five Element balance.