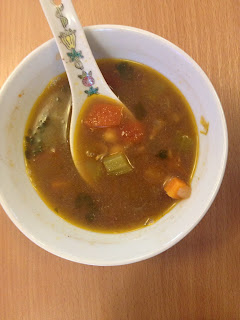 My students really loved the Moroccan spices in this mysterious soup. The light scent of cinnamon and ginger whetted their appetites and there wasn't a single chickpea left at the end of lunch. This soup is commonly served all over the Arab world and is particularly popular as the soup served at night during Ramadan. It's quite easy to make if you use canned chickpeas, but I think that soaking and cooking the chickpeas ahead of time is just as easy and the texture of the chickpeas is much better.  Otherwise, it comes together very quickly.  This soup often contains lentils and noodles and is sometimes thickened with flour.  I like it better this way and I learned to make it from one of my Muslim friends. It is a deliciously exotic soup and if you crave the flavors of Morocco, this is a soup for you!

Melt butter in a large soup pot. Add in the saffron (if using or Turmeric), cinnamon and ginger.  Stir and add in the chicken, onions, celery and carrots and cook until they become softened and the chicken becomes opaque. Add in the tomatoes, the chicken broth and the parsley and cilantro. Cook for ½ hour and check salt, adding some if necessary and sprinkle with fresh ground pepper.  Serve with toasted flat bread.

This is a broth-based soup so it is Watery by nature. The chicken and the chicken broth bring in the Wood Element along with the celery.  The Tomatoes and Cayenne Pepper contribute the Fire Element.  The Carrots and Chickpeas make sure that the Earth Element is represented and the Onions, herbs and spices bring in the Metal Element too. This then is a fully balanced Five Element soup!