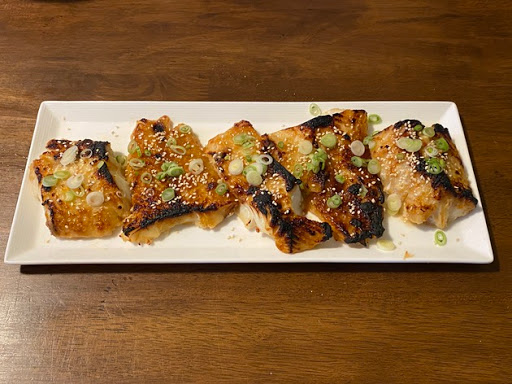 Japanese cuisine is one of my favorites. It is most likely because I spent my early years in Japan, but there is also something just so lovely about the way the Japanese cook and present food that makes me happy. That's beside the fact that everything is so delicious. When I used to go out, which I hope will happen again soon, I would often order Miso Glazed Black Cod with Rice and a side order of Sunomono - Japanese Cucumber Salad. So one night I decided to recreate it at home. The problem was the I didn't have any Black Cod but I did have some frozen Pacific Cod in the freezer and decided to use that instead. I actually forgot to look and see how much was in the package (it was from Costco and I froze it in separate pieces). So, I just cut up 2 of the pieces (they were big) into a total of 5 segments and coated them with a Miso glaze before I put them in the broiler.

My son Stephen was over so he made a Miso Glaze similar to the one from Nobu, but he changed the amount of everything and added a bit of Tamari to make it more savory. It didn't take very long for the Cod to cook, but I tend to like my fish to be firm so we cooked it for a total of about 10 minutes, glazing at the 5 minute mark and then again at the end. We sprinkled on some Green Onion pieces before serving and it was a beautiful dish. Can I just tell you how happy I was?  I didn't miss the Black Cod at all. In fact, I think I might like using Pacific Cod even more because it's less oily. You might want to cook yours for a little less time, but I do recommend this way of cooking Cod - it was just so delicious!

Heat the oven to Broil. Place the Cod on an aluminum foil lined baking pan. In a small frying pan, mix together the Sake, Miring, Miso Paste, Sugar and Tamari. Heat on low until the Sugar dissolves. Then take off the heat. Brush the Cod pieces two times. Place in the broiler and cook for 5 minutes, remove from the oven and brush the Cod again.  Cook for another 3 - 5 minutes and remove from the oven. Brush with remaining glaze and sprinkle with the Green Onion pieces. Remove Cod to a plate to serve.

Fish of any kind belongs to the Water Element, but white fish add a touch of the Metal Element too and the Green Onions contribute a bit more along with some of the Wood Element. The Miso and Tamari add even more Water. The Sake and Mirin contribute the Fire Element and the Sugar brings in the Earth Element. While not completely balanced, all the Elements are certainly present so it's just a matter of enhancing the Earth and Metal Elements which was accomplished by the side dishes of Rice (for Metal) and Sunomono Cucumber Salad (Earth).