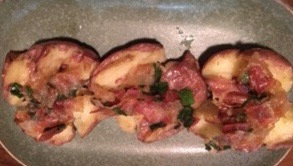 I really love Baked Potatoes, but I don't think about making them very often and I usually cook really big Potatoes and there is simply too much for me to eat. So last year, I decided to start baking smaller Potatoes. Then I read about smashing Potatoes and that was it!  I've been smashing them ever since!  What smashing Potatoes does is expose more of the Potato to the heat, which makes them a bit crispier. You have to boil them first and you can pick your choice of toppings. I like to use Butter, Bacon and Green Onions, my Son adds Sour Cream. If you haven't started smashing Potatoes yet, you might want to start as they are so delicious!


Cover the Potatoes with water and bring to a boil. Cook for 20 minutes. Drain and place on an oiled baking sheet.


Using the bottom a mug, push down on each Potato until it is about 1" thick. Put 1 teaspoon of Butter on each Potato and sprinkle with a pinch of Salt. Pu into the oven and cook for 25 minutes.

Meanwhile, cut the Bacon into small pieces. In a small frying pan, cook the Bacon until it is crisp. Remove and drain the fat. Add the Green Onions to the pan and cook until they wilt slightly.

Take the Potatoes out of the oven and sprinkle each with a bit of Bacon and Green Onion. Put back in the oven for another 3 - 5 minutes.  Serve with Sour Cream if desired.


Potatoes belong to the Earth Element so this is a primarily Earthy dish. The Butter and Green Onions contribute the Wood Element and the Green Onions and Sour Cream bring in the Metal Element. The Bacon makes sure that the Water Element is also represented. So only the Wood Element needs to be added so be sure to add some Green Vegetables to your meal!