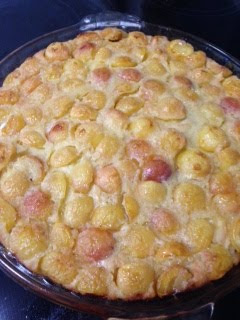 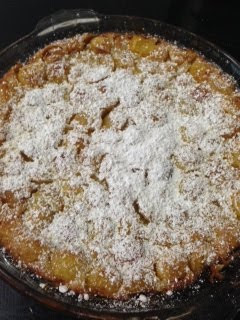 Cherry season is just starting here in Washington and I’m getting a bit impatient for the best Cherries to show up. So, I ended up buying some of the first Cherries I found at the Farmer’s Market and they just weren’t fully ripe. So, I will wait until next week to get some better ones as I like to get them fresh from the growers. And, whenever I have fruit that is underripe or a little overripe, I cook it. So, I decided to make a Cherry Clafoutis. This is one of the desserts that I used to love to make during summer and just haven't thought about making it since I've gone Gluten Free.

For those of you who don’t know, Calfoutis is a French dessert that is like a cross between a flan and a cake and I think it tastes like a Dutch Baby Pancake. It is usually made with dark red Cherries with the pits left in to give it a bit of almond flavor. I don’t like having to pit cherries when they are already in my mouth, so I add just a bit of Almond Extract instead. I used Soy Milk although you can certainly use regular Milk. You can also add other stone fruits, cut up and even Blueberries, but then it is called a Flaugnarde. After it comes out of the oven, it falls slightly and is dusted with Powdered Sugar and served warm.

I was so pleased at how my Clafoutis turned out and I thought it was beautiful with Queen Anne Cherries, although dark red Cherries are a bit more dramatic looking. It also tasted just like it was supposed to – delicious!  If there’s any left after you serve it, Clafoutis is also very good for breakfast!

Turn the oven on to 400 degrees. Butter a deep dish glass pie pan. In a bowl, mix 2 Tablespoons of the Sugar with the pitted Cherries.

In a mixing bowl, combine the Soy Milk, the remaining Sugar, Butter, Eggs, Vanilla and Almond Extracts and Flour. Whisk until mixed – it should feel like pancake dough.

Pour into the prepared pan and place in the oven. Bake for 25 minutes. Then turn down the heat to 350 degrees and continue to bake for another 15 – 20 minutes or until the top is lightly golden brown and the Clafoutis is springy to the touch.  Remove from oven and cool. Sprinkle with Powdered Sugar sifted through a metal strainer before serving. Serve warm if possible.

Well as a dessert, you know this is primarily an Earth food, but the Cherries bring in a good amount of the Fire Element and the Extracts, Gluten Free Flour, Butter and Milk contribute quite a bit of the Metal Element too.  So this s a very good dessert for a meal with Seafood or Pork Sausages as the main dish and green vegetables as the side to bring in the Water and Wood Elements for a balanced Five Element meal.