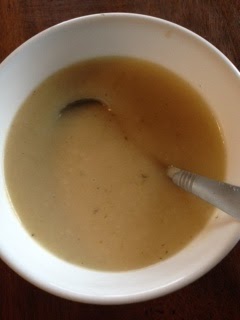 Here's the last Thanksgiving recipe I am going to post today. This recipe for gravy was a special request at our Thanksgiving celebration. Although this is a Gluten Free Gravy, it was so good that the person who asked me for it isn't even interested in that - she just loves the way it tasted! I love when Gluten Free food doesn't taste like it's Gluten Free! Now, I personally think that Gravy is the trickiest Gluten Free food to make for Thanksgiving. If you use Cornstarch or Potato Starch, the Gravy comes out kind of gluey and gummy. I've spent several years now missing the rich gravy that comes from creating a roux - that mixture of butter and flour that you cook until it is a rich brown that is the flavor base of gravy.

So, today I experimented with a recipe from Shauna James - the brilliant blogger of Gluten Free Girl. She recommended using Sweet Rice Flour (often called Glutinous Rice Flour but there is no Gluten in it! And, regular Rice Flour won't do....) She mixes that with Butter to make a real roux before adding the Chicken Broth. Her version says that the roux turns into a kind of paste, which she then adds back carefully in pieces to her hot broth. Mine didn't do that and it was a simple thing to pour cold (pre-made broth) into the roux to make the best Gluten Free Gravy I have ever had!  It is creamy and rich and just so perfect with Turkey!

I think the secret was using homemade broth. I didn't make the Turkey this year and if I had, I would have used the neck and wing tips and drippings to make the gravy. Instead, I made a savory Chicken Broth from the bones of a Rotisserie Chicken that I bought at the store  the other day. I cooked it for a long time with Celery, Carrots and an Onion. I salted it just the way I like it so I wouldn't have to do that when making gravy. It was waiting for me it the refrigerator, which gave me one less thing to do on Thanksgiving Day.

And, because I can't leave well enough alone and I had enough broth left, I made another version with Roasted Garlic - 10 cloves!  I'll post that recipe below too. It was just divine! Probably too adventurous for some people, but I loved it. I could also see adding in some sautéed Mushrooms and using Beef Broth when you have a roast.  I plan on using this tomorrow with the leftover Turkey I plan to make a Turkey Tettrazini with Gluten Free Spaghetti and Mushrooms. Finally, a good Gluten Free Gravy recipe has been created - thank you Shauna!

In a large pot, add in all the ingredients and bring to a boil. Reduce to a simmer and cook for 2 - 3 hours. Taste and add more Salt and Pepper as desired. Strain and reserve Stock for later use.

Heat oven to 425 degrees.  Place Garlic Cloves on a piece of Aluminum Foil and make a little cup with the foil. Pour in the Olive Oil and sprinkle with Salt.  Close up and place in a heat proof little pan and roast for 40 minutes. Remove and cool.

Chicken and Turkey Broth belong to the Wood Element and the Celery in the broth adds even more.  The Onion from the broth and the Roasted Garlic, if you use it contribute the Metal Element along with the Butter. The Carrots in the broth bring in some of the Earth Element. The Salt is the only representative for the Water Element so be sure to serve a Water food in the meal to create a Five Element balance.