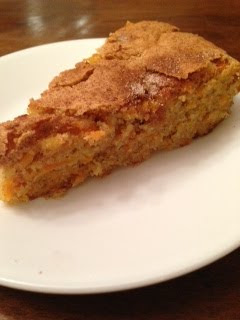 I don't get a craving for sweets very often and when I do, I don't want something too sweet.  I tend to like sweet breads - usually Banana Bread. But I didn't have any Bananas. I thought about making Zucchini Bread, but didn't have any Zucchini either. I did have a big Butternut Squash and I only used a little of it.  Since I was seriously in the mood for something sweet, I decided to experiment and I made a wonderful Gluten Free Butternut Squash Almond Cake that was so good! I adapted a recipe from Martha Stewart for Zucchini Cake that turned out to be a little bit more complicated than I expected. The tricky part was getting the Eggs and Sugar really whipped and frothy in an adapted double boiler before mixing it with the other ingredients. Her recipe was for a Zucchini Cake and it had a Cream Cheese Frosting. I'm not a big frosting fan, so I opted for a sprinkling of Cinnamon Sugar and instead of Vanilla Extract, I used Pumpkin Pie Spice. The Butternut Squash gave it just the right moistness and the cake was even better this morning - yes I did eat cake for breakfast!  It tasted a lot light Carrot Cake, only lighter. I might serve this instead of Pumpkin Pie for Thanksgiving  I liked it so much!

In a bowl, mix together the Almond Flour, Potato Starch, Baking Powder and Salt. Put aside until needed.

In another small bowl, combine the Sugar and Cinnamon.

Heat a pot with one inch of water in the bottom, bring to a boil and turn down to a very low simmer. Put a heat proof bowl big enough to go on top. Crack the eggs in and whisk until foamy, about one minute. Then add in the brown sugar and whisk until the Sugar is dissolved and the mixture is very foamy. Take off the heat and use either a hand mixer or pour into the bowl of a stand mixer, using the whisk attachment on high until the mixture is thick and frothy – about 7 to 10 minutes.

Then gently fold in the melted Butter and the Almond Flour mixture with a spatula and pour into the prepared pan. Sprinkle with the Cinnamon Sugar mixture place in the oven. Cook for 25 – 30 minutes or until a toothpick comes out with some crumbs sticking to it.  Let the cake cool completely before serving.

As a dessert, you know that this is going to be an Earth food, but this one is particularly Earthy as it is made with Almond Flour, Potato Flour and Butternut Squash along with Brown Sugar. So, this is a an almost Completely Earth dish, except for the bit of the Metal Element with the Spices and the Water Element with the Eggs. The good news is that it is very grounding as well as delicious and satisfies the sweet craving while being full of Squash!