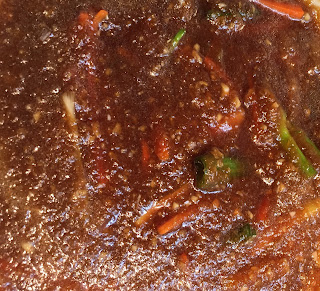 At our Asian dinner party the other night, we made Bulgogi with a more authentic recipe than the one that was previously posted, as we added Asian Pear to the recipe. It adds a lovely sweet note that makes the marinade more complex. Bulgogi is a great meat to serve at a party as it takes such a short time to cook as it is very thin slices of beef. So, when everything else is ready, you can cook these in just a few minutes and the meal is ready.  Be sure to marinate the meat for at least 30 minutes up to overnight. Longer is better I think to get the most flavorful meat!

Puree the Asian Pear and Onion together in a food processor or blender.  Then mix all the marinade ingredients together in a bowl. Add the sliced beef and mix well. Marinate for at a minimum of ½ hour, but overnight in the refrigerator is best for maximum flavor. To cook the Bulgogi, remove the meat from the marinade and grill on the BBQ, broil in the oven or pan sear the meat on a hot, greased cast iron skillet until the beef is no longer pink and the edges are browned. Sprinkle with Sesame Seeds and serve with rice or as lettuce wraps and Korean hot sauce - Ssamjang.

This is a sweet marinade made so you now that it has some Earth in it and the Beef, Carrot and Asian Pear make it even Earthier. The Onion, Garlic and Green Onion contribute the Metal Element. The Tamari, Sesame Oil and Sesame Seeds add the Water Element and the Black Pepper and Hot Sauce bring in the Fire Element. Only the Wood Element is missing, so be sure to serve it with some green vegetables, like Spinach to create balance.