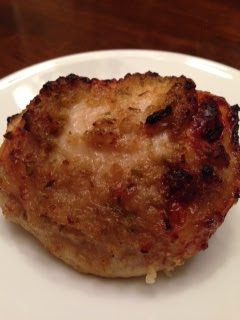 I love Indian flavors and this is one cuisine that I am cooking from on a regular basis. I think that Indian cuisine brings and blends spices like no other. Because I have only been exposed to Indian restaurants that have been Americanized or made more British, I am always seeking authentic Indian recipes. Recently, I was doing a decluttering of my entire house and started to go through old cookbooks. I gave away only a few, but in the course of evaluating them, I ran across my first Indian cookbook, which was Madhur Jaffrey's first cookbook, An Invitation to Indian Cooking. My copy of it is almost falling apart and I have taped together the paper cover several times. One of the recipes that I have made many times over the years is her Marinated Chicken. Of course I had to adapt it to my tastes as  I simply can't handle very hot foods.  So, I changed her recipe so that it less spicy. This dish has never failed to please my guests or kids. The secret is in marinating the chicken for a long time. I use Chicken Thighs, although the original recipe calls for breasts, but I think the Thighs turn out a lot juicier. I also bake the Chicken instead of broiling it. I think the reason I like this recipe so much is that at that time I found this one, a favorite way of making chicken was to marinate it in Wishbone Italian Dressing. When I first made this, I thought it was so much more delicious than any chicken I had ever had! It's been a favorite recipe ever since. The marinade becomes almost like a crust on the chicken. It is so good that I encourage you to make it too. Thank you to Madhur Jaffrey!

Combine Onion, Garlic, Ginger, Chili, Cumin, Coriander, Vinegar, Salt, Pepper and Oil in a Cuisinart (or other food processor or blender - you can also use a stick blender). Blend into a smooth paste.  Place marinade in a large Ziploc bag and add in chicken. Seal and turn over several times to coat the chicken. Place plastic bag of chicken into a bowl and put in the refrigerator to marinate - turning at least half way through. Marinate for up to 24 hours and at least 2 to 3 hours.

When ready to cook, preheat your oven to 400 degrees. Line a baking pan with parchment and place chicken pieces on it.  Spoon the remaining marinade on top of each piece of chicken. Cook for 50 minutes. Then turn the heat to broil and cook for an additional 5 minutes or until the top gets crispy and browned, being careful not to burn it.

Chicken belongs to the Wood Element and the vinegar in this dish adds even more Wood.  The Serrano Chili contributes just a little bit of the Fire Element and the Cumin and Coriander along with the Garlic and Onion bring in the Fire Element. The Earth Element is missing as is the Water Element, so a Salad for the Fire and an Eggplant dish for the Water would be good side dishes and a sweet dessert would round out the Five Elements.