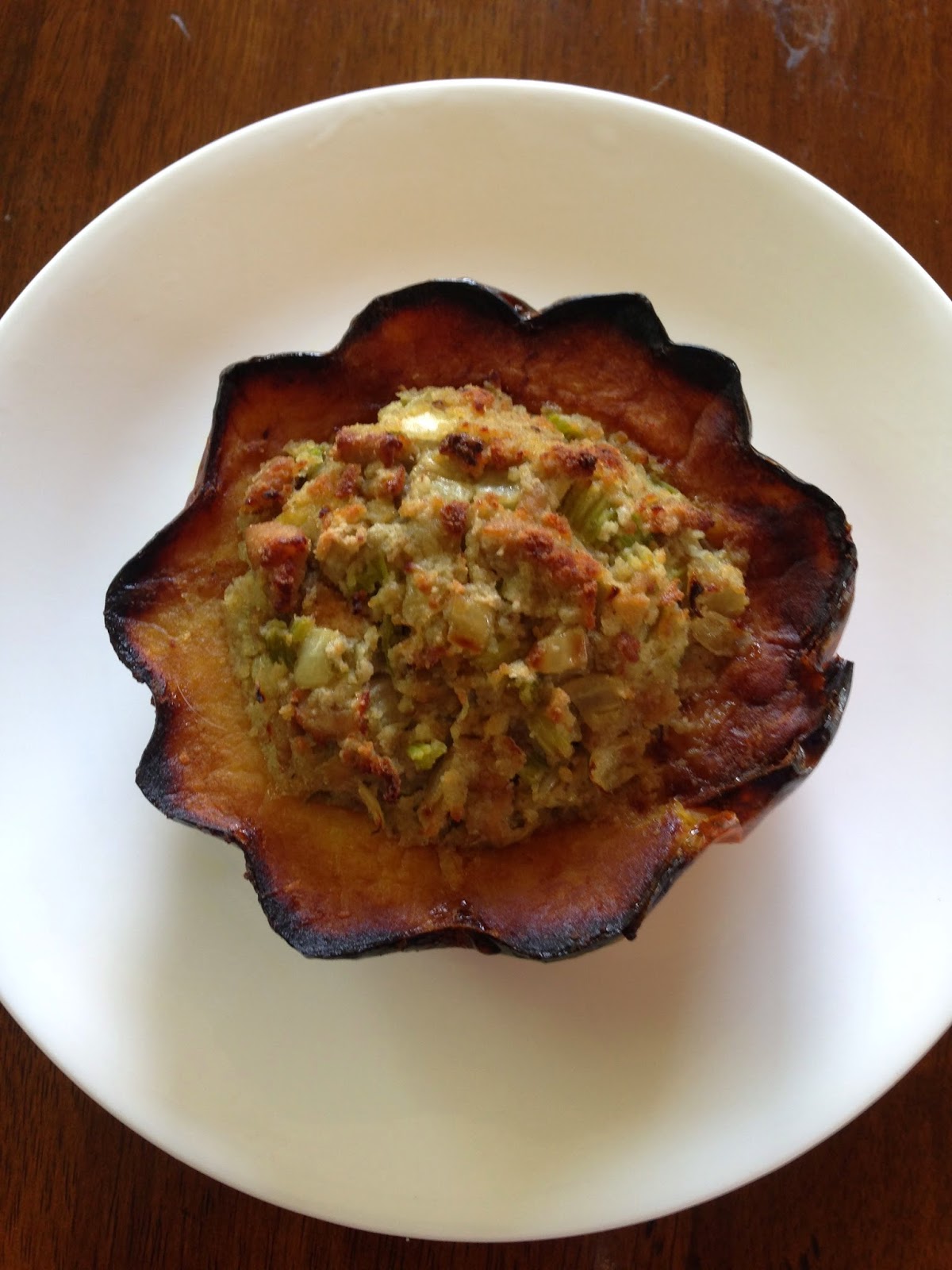 It is beginning, just a little, to feel like fall. There's that tiny nip in the air in the early morning now. I love fall and I love all the harvest foods. So when I went to the market, I bought an Acorn Squash. In Chinese Medicine, squashes relieve dampness and help remove phlegm - something quite useful after a humid summer.  So today, I baked it and then stuffed it and it turned out so well that I had to share it with you. I used a stuffing that is a slight variation of one that I use for Thanksgiving, only this time I used Udi's Gluten Free Bread instead of regular wheat bread. But of course, you can use regular white bread if you want.  You can also use any other cooked grain like rice or millet or a seed like Quinoa if you prefer. I also used Chicken Breakfast Sausage and some celery, onions and sage.  You could definitely replace it with pork sausage if you prefer. I almost made it vegetarian and used mushrooms instead. Use your imagination as I think it would be good with so many different things! The only trick is to bake the squash first before you stuff it and then bake it some more when the filling is added. The squash caramelizes and the stuffing adds a wonderful savory counterpoint to the richness of the baked squash.  I loved it - it tasted a bit like Thanksgiving and was nourishing and nurturing.  And it was a really beautiful dish too. I hope you'll try it. I'm definitely going to keep making it as it was simply delicious!

Heat the oven to 375 degrees.  Drizzle oil over the cut side of the squash and then turn face down on a baking sheet.  Cook for 30 minutes and remove from oven.

In the meantime, melt the butter and cook the Chicken Sausage, onions and celery until the sausage is no longer pink and the celery and onion is soft.  Pour into a mixing bowl and add the bread cubes, the sage and the salt a pepper.  Mash up the bread with a large wooden spoons (or your hands).

Mound equal amounts of stuffing in each squash half.  Put in the oven and cook an addition 20 - 30 minutes or until stuffing is lightly browned.  If after 30 minutes, it is still pale, then turn on the broiler to brown it.  Serve immediately.

Squash with it's rich orange color and sweet taste belongs to the Earth Element.  The Chicken Sausage and Chicken Broth contributed the Wood Element along with the Celery. The Onions and Sage brought in the Metal Element as did the Udi's bread as it is made mostly of Rice Flour and Tapioca Flour. The Fire Element is missing, which can be added with a Fiery beverage like tea or wine or by serving with a salad.  The Water Element is also missing so be sure to serve another Watery Food with this dish like some dark berries for dessert or at another meal to create a Five Element Balance.