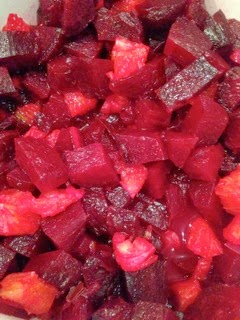 I'm still feeling a bit pale and wan so it's time to build even more blood. So, since I already had enough beef, I turned to my favorite vegetable blood builder - beets. In Chinese Medicine, they support the heart and detoxify the liver.  In Western Medicine, they have been shown to lower blood pressure. They are really good for you! When I was a child, I didn't like them at all - I thought they tasted like sweet dirt.  I still think that, but now I like that taste and in fact I crave it. The turning point was eating beets slightly pickled in something sour.  My favorite way to eat beets is in a salad with oranges and a dressing made of lemon juice. The tartness contrasts perfectly with the sweetness of the beets. I roast the beets first instead of boil them as I think it enhances the flavor. This can be done ahead of time if desired. Then this salad can be made anytime up to a few days later and holds well in the fridge once made if you want to serve it later.

This is a beautiful salad and the oranges turn kind of pink and the combination of citrus and beets is a magical one. I've brought it many times to potlucks and it's always been a big hit.   I can't believe I once didn't like such an amazing vegetable and I am making up for it now as I eat beets often. My son likes to serve this salad with some goat cheese.  Either way, it's a delicious salad that gives you more than just good flavors!

Turn the oven on to 425 degrees. Put beets on a baking pan.  Drizzle 1 Tablespoon of Olive Oil over the beets and rub in.  Place in the oven and roast until beets are done (about 1 hour).  Cool, then trim ends and peel before cutting into small chunks.

Place the cut beets into a glass bowl (beets tend to stain plastic). Add the remaining 3 Tablespoons of Olive Oil, the lemon juice, the onions and toss with the beets. Add the oranges and toss lightly again.  Season with salt and pepper and serve.  If desired, top with pieces of soft goat cheese.

Beets are an Earth food as they are a root vegetable and also naturally sweet.  The oranges and lemon juice bring in the Wood Element.  The red onion contributes the Metal Element and the goat cheese adds even more. So serve this salad with foods that represent the Water Element (I served fish) and the Fire Element (we had wine) to create a Five Element balance.