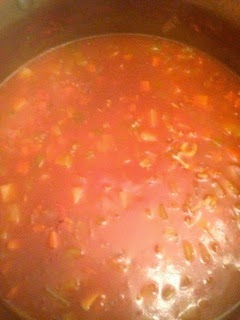 I've been traveling so much and I'm finally home, but only for a very short time!  I'm headed out again tomorrow, but for one night, I got to cook in my own kitchen and all I wanted was to make some soup. However, the pantry was a little bare. So, I ended up making a wonderful soup by combining a bottle of Clamato Juice, some cans of Chopped Clams and some celery, carrot and potatoes.  It was so easy, so fast and so delicious that the recipe was requested by my son.  I only wished that I had some little Goldfish crackers to put in it as that would have made a charming picture.  This soup came together in such a short time and felt really nourishing.  It was a grown up version of Tomato Soup and I'm definitely going to make it again!

In a large soup pot, put in oil, onion, celery, carrot and potatoes. Cook over high heat until the onion becomes translucent.  Pour in the Clamato Juice and add the clams - including the clam broth. Bring to a boil and reduce heat to a simmer.  Cook for 1/2 hour and serve.

Clams belong to the Water Element and Tomatoes to the Fire Element so those elements are covered.The Celery brings in the Wood Element, the Carrots and Potatoes contribute the Earth Element and the Onions, the aromatic Bay Leaf and the Thyme contribute the Metal Element making this a balanced little soup!