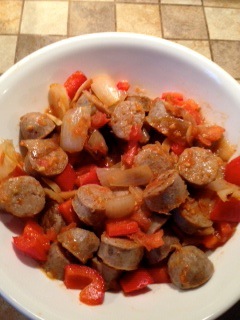 I was at my hometown Farmer's Market and was impressed with a stand that made a very simple sausage and peppers sandwich that was stuffed into a cored out half of a baguette. M son said it was delicious, so I got inspired to recreate it at home. I bought some Spicy Italian Sausage and cooked it with some onions, garlic, red pepper and fresh tomatoes - I left out the green pepper as I tend to pick them out of dishes even when I use them for color. I cooked the sausages in a bit of olive oil and steamed them with a little water to make sure they were fully cooked. Then I took them out and cut them into pieces. I then sauteed the onions and red peppers until softened, stirred in some fresh cut tomatoes and wine and cooked it all until it made a sauce. I served mine on a special Gluten Free Sourdough Bread that I also found at the market, but my sons thought the carved out baguette ends were the perfect way to eat a sandwich. What we liked best was that the bread soaked up the sauce much better and made it a simply scrumptious sandwich. My son added some Parmesan cheese, which he said topped it off perfectly and next time he is going to try it with some Provolone. I also think this dish would also be good on pasta or polenta.

In a frying pan (with a lid), heat up 2 Tablespoons of the olive oil and add the Sausages.  Cook, turning until both sides are brown. Then add in water and cover, cooking until the water is evaporated.  Remove sausages and cut into pieces and set aside.  Add the additional 2 Tablespoons of olive oil and put in the onion, red pepper and garlic and cook until the onion is just beginning to brown.  Add in the Roma Tomatoes and the wine and cook until a sauce is formed.  Serve in the hollowed-out ends of a Baguette or with bread/roll of your choice

Sausage is made from pork and that is from the Water Element.  The onions and garlic belong to the Metal Element and the spices (particularly the fennel) add even more.  The Olive Oil contributes just a bit of the Wood Element, but the Baguette brings in more. The red pepper, tomatoes and wine add a lot of the Fire Element. So, this ends up being a very balanced little sandwich!