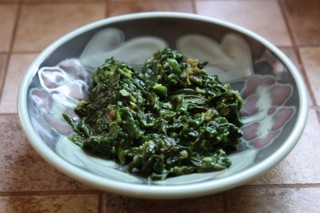 I love the Indian dish, Saag Paneer, but can't do the cheese so I have sometimes made it substituting various things like little squares of tofu or potatoes to make it look authentic.  But to be perfectly honest, the thing I love most about this dish is the spinach itself - it's soft, creamy and unctuous with that little hint of Garam Masala that makes it exotic and the touch of Cayenne Pepper that gives it slight bite.  So, now I just make the spinach without anything else.  It's a wonderful side dish, especially served with a steak in place of the usual Creamed Spinach.  I make it with Lactaid Milk and if I want to make it really creamy, I will use real cream as it has a low lactose content too.  It's also lovely served over rice or folded into a flatbread or even made into a dip if you add more cream.  It's really such a wonderful way of eating spinach.  And, once you make this version, you may never go back to regular Creamed Spinach again!

Chop spinach into small pieces and set aside.  Take the garlic and ginger and put into a Mortar with the salt and water and grind with the pestle until you have a smooth paste.

Heat ghee (or butter) in a frying pan.  Add in garlic and ginger puree and cook for just a few minutes.  Add in the chopped spinach.  Cook until the spinach wilts.  Add in the milk (or cream), Garam Masala and Cayenne Pepper and cover for 10 minutes, stirring often.  Spinach should be soft and smooth. Season to taste and add more salt if necessary.

Spinach is a Wood food so that element is covered.  The garlic, ginger, Garma Masala and the milk (or cream) add the Metal Element. The Cayenne Pepper brings in just a hint of Fire, but that element needs support. So, serve this dish mea with something fiery such as another spicy dish and you need to make sure you also add in a Water food and an Earth food to create a balanced meal. I served it with Peppercorn Crusted Steak, which is an Earth meat with a Fire Space and I served some eggplant too, which added in the Water Element.