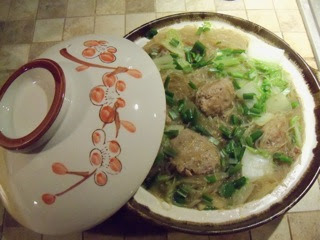 One of my mother's favorite foods is Lion's Head Meatballs and while I was down in Los Angeles visiting her, I made it for her. This is actually her recipe, but she hasn't cooked for years and luckily she taught me how to make what she likes best before she retired from cooking. I've been meaning to post this recipe for days, but I've been moving so I got delayed. Lion's Head Meatballs is a fancy term for pork meatballs pan fried and then simmered in chicken broth with bean thread noodles, Napa Cabbage and some green onions. When this dish is served in China, the meatballs are usually enormous, but my mother likes them smaller, so that's the way I make them.

Lion's Head Meatballs are very subtly flavored with just a bit of Soy Sauce (or Tamari if going gluten free) and Sesame Oil. For those of you who haven't tried bean thread noodles, they are translucent and a bit slippery and are made from Mung Bean flour. They are also featured in Ants on a Tree, which I will post another day. Anyway, it's a lovely dish for a cold night (although it was actually only cool outside when I made it). It's kind of a cross between a soup and a stew as there isn't that much broth so feel free to make it soupier if you like. I cooked it in a Chinese clay pot although a Wok works just fine too. We eat it with a combination of chopsticks and a Chinese spoon and it's a dish just meant for slurping, which is perfectly acceptable to the Chinese. They are often served for Chinese New Year as the round shape of the meatball means families reunite.  I hope you enjoy this dish too!

Soak bean thread noodles in a large bowl with warm water to cover for 10 minutes. In a wok or a pot, heat the Chicken Broth and keep at a simmer. In a large bowl, mix together Pork, white part of the Green Onions, Tamari, Rice Wine and Cornstarch. Shape into 2" balls and place in a large frying pan. Cook over Medium High heat until browned. Remove meatballs from the pan and place in the simmering Chicken Broth. Add oil to the frying pan and put in the Napa Cabbage. Stir fry until wilted and just beginning to brown. Add to the Chicken Broth with the Bean Thread Noodles, Soy Sauce and Sesame Oil. Bring to a boil, reduce heat and simmer for 10 minutes. Add in green onion tops and top with ground pepper.

Pork belongs to the Water Element and since this is a bit soupy too and is seasoned with Tamari and Sesame Oil - all Watery seasonings, that Element is covered. The Chicken broth contributes the Wood Element, the Napa Cabbage adds the Earth Element and the Mung Bean Noodles and the green onions bring in the Metal Element. Only the Fire Element needs some help, so using some Chili Oil or other Chili Sauce would balance out this dish and makes it a wonderful on-dish meal.