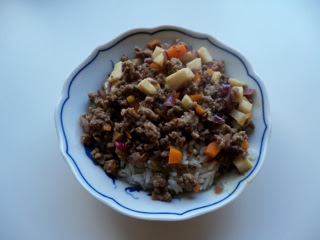 As I have mentioned in previous posts, my Chinese Grandfather, Kingway Lowe was an extraordinary cook. If you have ever seen the movie, "Eat, Drink, Man, Woman" you will know what kind of cook he was. He cooked so many amazing dishes every day and it is because of him that I have an educated palate for excellent Chinese food. But, one of the quirkiest dishes he made was Chinese Hamburger. It's kind of like a Chinese version of Sloppy Joes only you serve it over rice instead of on hamburger buns, but it would be good that way too. It is composed of ground beef, onions, carrots and celery all cooked together and seasoned with a soy sauce based gravy.

My grandfather actually invented it in deference to his two Caucasian son-in-laws. Now my father actually liked Chinese food - the more authentic the better. But my Uncle Don had a fear of anything unusual and got quite queasy when confronted with some of the strange ingredients that the Chinese eat. So, this dish was created to satisfy his less adventurous tastes. Then it ended up becoming one of the favorite dishes of all of us grandchildren - 18 in all. And, we used to beg our Grandfather to make it. I used to watch very carefully as he made it because I wanted to know how it was done and it wasn't until I was a teenager that I learned the secret ingredient was curry powder. It isn't tasted immediately and it adds this exotic and slightly mysterious depth of flavor. I now use a lot more curry powder so that you can see that it is in the dish as it colors the rice a bit yellow and I still make this dish all the time.

My kids grew up on it and when I told my son that I made it at my friend's house here in Europe, he wanted me to post the recipe so he could make it at home too. The only difference you will see in the picture is that I used celeraic, or celery root instead of celery stalks and that was only because I couldn't find regular celery at the little market near my friend's house. I also used a red onion as that was what she had in her pantry. The celeraic was a surprisingly good substitution. It still had that lovely celery taste but added a different kind of crunch. I will no doubt use it again, but I did miss that bit of green color in the dish. You need to try this one - it will surprise you with its' homey deliciousness! And beware, it is strangely addictive.....

In a large frying pan or wok, heat oil and add in vegetables. Stir until onions get soft and add salt and pepper. Add in ground beef and cook until it is no longer pink and it is broken up into small pieces. Put in Curry Powder and stir a few more minutes. Then, pour in chicken broth mixture and 2 Tablespoons of soy sauce - taste and add more soy sauce if necessary. Then bring to a boil and cook until sauce thickens slightly. Add in a few drops of Toasted Sesame Oil and serve over white rice or on toasted hamburger buns.

Beef belongs to the Earth Element and so do carrots so that element is covered. The celery and chicken broth add in the Wood Element. The Soy Sauce and Sesame Oil contribute the Water Element and the onions and Curry Powder bring in the Metal Element. The Fire Element is the only one that is missing and this can remedied be added by serving with some chili sauce or by drinking tea. And, if it is part of a multi course meal, make a dish that is spicy hot or that includes some Fire vegetables to create a balanced Five Element meal.