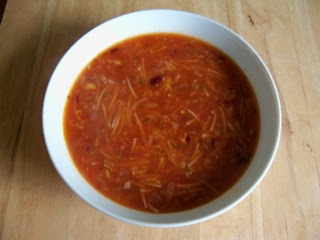 I have been surrounded by people lately who are sick with colds or the flu and I am determined to keep myself healthy so I don't catch anything from them. As I used to be a very sickly child, I make the foods that I used to eat while I was sick as a preventative measure. I figure - if they help you heal, they can certainly help you stay well! So, I make my usual Chinese Chicken Soup (see March post) and lots of hot lemonade with honey (a slice of lemon in hot water with a big spoonful of local honey - if you add Scotch you have a Hot Toddy!) And today, I remembered a great recipe that I got from one of our housekeepers when I was 10. She used to make me Sopa de Fideos when I was sick and it was wonderful. I haven't made it in a long time and it's really amazingly easy and so delicious.

The combination of chicken broth, tomatoes, garlic, onion, chili powder, oregano and cilantro (although I didn't have any tonight) with thin little noodles are just the things to fight off all those nasty little viruses flying around. I do need to mention that this was the only thing she made well. I distinctly remember having to hide pieces of hot dog in my napkin until I excused myself to flush them down the toilet whenever she made hot dog tacos - the were disgusting - ugh! In any case, she didn't work for us very long because she was pregnant when we hired her and she reconciled with her husband when her baby was born. But, I do appreciate this recipe for a delicious and simple soup that she left behind. So thank you Maria!

In a large frying pan, heat the oil and put in garlic and onions until the onion is soft. Add in Fideo noodles and cook until they begin to brown. Add in chicken broth and tomato sauce (or chopped tomatoes) and bring to a boil. Reduce heat to a simmer and add in Oregano and Chili powder and zucchini if using. Simmer for 10 minutes and taste for seasoning. Add pepper and salt if necessary. If you like things hot, add in a bit of Cayenne Pepper and serve with a garnish of chopped cilantro.

Soup by its very nature is part of the Water Element, but chicken broth and wheat noodles belong to the Wood Element so that element is covered too. The tomatoes, Chili Powder and Cayenne bring in the Fire Element. The onions, garlic, cilantro and Oregano contribute the Metal Element so only the Earth Element is missing. Adding some chopped zucchini to the soup would balance the soup as they are Earthy and so would serving beef as the main course or finishing with a sweet dessert.