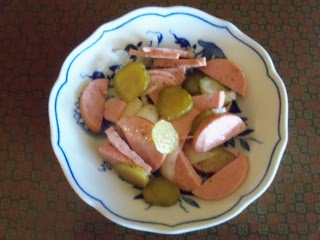 In my quest to cook "real" German food, I decided to make Wurst Salat or Sausage Salad that I like to buy at the Fleischerei when I need a quick meal. Now the Germans are known for putting meat in their salads and this particular one is a little unusual as the only vegetables in this salad are pickles and onions and the meat is Ring Bologna. It all comes together with a vinaigrette made with a good German mustard. I know it may sound a bit strange, but if you haven't tried it - you should. It is actually really good! Emmentaler Cheese is often added in Bavaria and in Switzerland, but I didn't have any and I'm Lactose Intolerant anyway. Ring Bologna is quite good cooked with onions until they are caramelized and browned and served with lots of mustard, but it's finally hot here in Germany and I just didn't feel like cooking it that way. So, I made this meat salad and also a salad of cucumbers in yogurt with fresh dill and a little garlic to go with it. I served it all with some good German bread and butter. It made for a lovely light Mittag Essen or lunch. Hope you try this recipe and please let me know what you think!

Toss all ingredients together and refrigerate for at least 1/2 hour or several hours to let the flavors meld. Serve with buttered bread.

Five Element Analysis
This salad doesn't contain a lot of ingredients so you already know that it has to be part of a meal that includes other dishes. The Ring Bologna is cured pork so it automatically belongs to the Water Element. The sour pickles add the Wood Element and so does the bread. The cheese (if you use it), the mustard and the onions contribute the Metal Element. There is only the hint of the Earth Element with the bit of sugar, so that element needs some support and the Fire Element needs to be added. The cucumber salad I made to got with this dish added more Earth (and Metal from the yogurt, dill and garlic) and I also served ice tea to bring in some Fire.