Happy Chinese New Year's Eve! It is also the one year anniversary of 5 Element Food and it has gone by really fast. Tomorrow is the Year of the Wood Rabbit and for me it is quite a relief after the turbulent Tiger Year! As usual, I am preparing some lucky foods to celebrate the start of the new year and one of the most important ones to serve is a noodle dish as noodle imply that you will live a long life so be sure not to cut them when you cook them. This is one of the noodle dishes that my kids have always liked best. The great thing about it is that it can be made ahead of time so that the rest of the meal can be prepared. Annie Chun makes a great packaged noodle salad mix if you don't want to make it from scratch, but I don't think the noodles are long enough to serve on Chinese New Year. And, it is so easy to make from scratch with just a few ingredients that you probably keep on hand or you should - the basic sauce is just soy sauce, seasoned rice wine vinegar and sesame oil with a bit of garlic. If you like it a little on the spicy side, you can add chili powder or chili oil.

In the summertime, I often serve this salad with a shredded poached chicken breast (store bought roasted chicken breast is good too), but for Chinese New Year, you have to serve a whole chicken if you want family happiness. I usually use Chinese noodles, but I forgot to buy them so I substituted spaghetti and I actually liked the more al dente texture. Mixed with cucumbers, red pepper and green onions, it is a refreshing side dish that juxtaposes well with the other cooked dishes. It's also good with snow peas and thinly sliced carrots that have been lightly blanched. Chopped peanuts are really tasty as a garnish so are almonds, but I don't add them for a party as there may be someone with an allergy to nuts. So, sesame seeds are the safer bet. If I have enough time, I julienne the cucumbers and red peppers as it is so much more attractive, but as I was making a lot more dishes, I just peeled, seeded and cut the cucumbers into half moon slices and cut the red pepper into nearly equal size pieces. It's simply tossed together with some thinly sliced green onions and nuts and cilantro for a garnish - if desired Be sure to prepare it ahead of time so that the noodles absorb the sauce thoroughly. 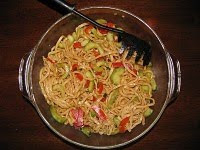 1 package of spaghetti or linguine noodles (1 pound) or an equal amount of Chinese noodles (for a gluten free version use a package of Tinkayada Rice Spaghetti)
2 cucumbers, peeled and cut in half, seeded with a teaspoon and sliced into thin half moons or julienned into thin shreds
1 large red pepper or 2 medium, cut in half with stem removed and then sliced into slices about the same size as the cucumber or julienned
3 green onions, root cut off and cut cross into thin slices or shredded if julienning the other veggies

Optional: a handful of snow peas and/or thinly sliced carrot blanched in a small amount of boiling water for 3 - 4 minutes and rinsed with cold water

For Sauce - Mix and taste:

Boil noodles according to package directions - about 10 minutes and drain, but do not rinse. Place in a large bowl and put in cucumber, red pepper and green onions (and snow peas and carrots if desired). Pour in dressing and toss. Let flavors meld for at least 15 minutes before serving and this salad can also be refrigerated and served cold. When ready to serve, garnish with peanuts, almonds or sesame seeds and cilantro if you are using them.

As there are a number of different ingredients in this colorful salad, you can pretty much guess that there will be some inherent balance in this dish. The noodles are made of wheat which belongs to the Wood Element and so does the rice vinegar so that is the dominant element in this dish and if you add chicken, you have even more Wood. The red pepper and chili if you use it add the Fire Element, whereas the cucumber brings in the Earth Element. The soy sauce and sesame oil contribute the Water Element and the green onions and garlic provide the Metal Element. Guess what? This is a balanced dish all by itself so it's good for a light summer lunch and as a side dish it automatically creates a balanced meal.