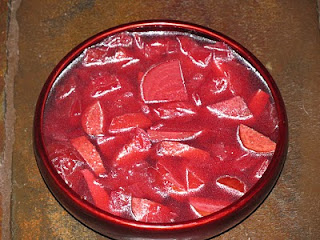 It's really starting to look and feel like spring here in the Northwest. Oh, I know it's not official yet and chances are we will have a few more coldspells before it is time to plant the tomatoes, but my cherry and plum trees are blooming and it's so much warmer than usual. I didn't say it was warm - just warmer. So, it's that time of year when soup still hits the spot. I love soup and think it is one of the most nurturing foods in the world. Most people need to support their kidneys and soup is just the thing to nourish them. The minerals from the root vegetables and bone stock help you hold onto the water your body needs. When I was a child, I seemed to have chronic dark circles. I would go over to my grandparent's house and my grandfather would always shove a bowl of soup at me and say "Eat soup - you look tired." I learned that soup was the best medicine for my kidneys so I make soup a lot. It's one of the foods I crave most when I am tired, don't feel well or I'm jetlagged. I'm always amazed that most people don't eat more soup. Wherever I travel, I try the local soups and I've collected all kinds of recipes. I'm sure you'll see them all here eventually.

Beet Soup is one of my all time favorites and it's often called Borscht. I never liked beets as a child as I thought they tasted like sweet dirt. It wasn't until my Polish Grandmother-in-Law made her famous Beet Soup that I learned to appreciate them. I think it has to do with the vinegar that cuts through the sweetness of the beets and her recipe was and still is the best I have ever had. I begged her to teach me and she had to show me as she was one of those cooks that never wrote the recipe down. She would serve this every Easter and any other time we asked her.

I've served this soup to my students when they have come to study with me and all of my friends. And although many of them have told me they don't like beets, I’ve made a lot of converts! They usually end up loving this sweet and sour soup once they taste it. Plus it builds blood! This is also the most requested soup recipe to date.

I’ve adapted the recipe to make it just a little lighter tasting by using chicken broth instead of beef and Turkey Kielbasa instead of the traditional Beef and Pork version, which is quite hearty. Also, I use seasoned rice wine vinegar instead of the classic white vinegar and sugar mixture. Peeling beets is a messy business and I recommend that you peel them in the sink and cut them on a non-porous cutting surface otherwise your cutting board will be dyed a pretty pink for quite a while. Grandma Jane's way to serve this soup was to stir in the sour cream then ladle it into a bowl over creamy mashed potatoes - my oldest son's preferred technique. It makes the soup extra creamy. She also sprinkled chopped hard boiled eggs on top - my youngest son's favorite version. It is just as good made as a vegetarian soup, but my family loves the chunks of Polish sausage. I am rather earth deficient so this soup is very good for me. If you need grounding and a boost for your blood, you should try it!

Pour broth into a large soup pot. Add cabbage, carrots, celery and onions along with the beets. Bring to a boil and simmer for 45 minutes. Add Polish Sausage and cook until heated through – about 10 minutes. Taste for saltiness and add salt and pepper if necessary. Add Seasoned Rice Wine Vinegar until it achieves a nice sweet and sour flavor. You can add in sour cream or serve it on top and let everyone stir it in themselves.

Don't forget to make some mashed potatoes and chopped hard boiled eggs to serve along with the soup.

Soup is a watery food and therefore is so good for the kidneys. This is an earthy soup as it is rustic - the vegetables and sausage are cut into fairly large chunks. Beets belong to both the fire and earth elements. They are red and build blood and they are even shaped like a heart - all signs of fire, but they are also root vegetables and so sweet that they are also earthy. The carrots enhance the Earth Element as does the cabbage and the cooked onions. The chicken broth and turkey sausage add the Wood Element as does the vinegar. Sour cream is a combination of Wood and Metal as it is sour and therefore Wood, but it is also white cream and it is used as garnish so it has some Metal energy too. Mashed potatoes add even more Earth and chopped hard boiled eggs add more Water. There isn't quite enough Metal in this meal so be sure to eat something metallic with it or at some other time in the day.