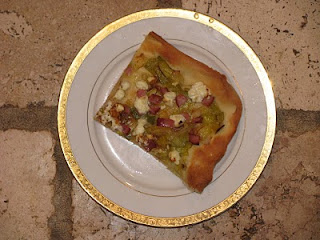 While my sons were rapidly growing teenagers, I realized that to keep my ravenous boys fed meant I needed to radically increase the amount of food I was cooking. They could decimate the contents of the refrigerator and pantry so fast that I felt like I was always returning to the grocery store. They had the ability to consume vast quantities of food and their favorite food was pizza.I’ve always thought that pizza was one of the better choices for fast food as it is easy to add nutritional value if you pick the toppings carefully. Besides that, tomato sauce gives them a nice dose of lycopene that studies show may help prevent prostate cancer. We were in the habit of ordering take out pizza at least once a week and I would usually get two large pizzas. By the time I added in the tip, the meal would end up being about $25.00 and that was only for one topping on each thin pizza chain pizza! I felt like I would be giving my kids a big gift if I made their pizzas myself knowing that the quality of ingredients would be better.

What surprised me was how much less expensive it was to make homemade pizza and how much more my sons enjoyed it. I only made one pizza and had the boys help me with the toppings. I gave them an array of things to choose from and had them make their own half. I learned long ago that if I gave my kids some choices or better yet got them to help me then they would be more likely to eat what they made. One side ended up being Pepperoni and the other was Italian Sausage. I was surprised when they added black olives, mushrooms and one put on onions and the other one put on lots of garlic. The pizza was ready in just a little over the amount of time it would have taken to order and wait for the delivery. The pizza was a huge hit and my boys devoured most of it but not all. I was afraid they didn’t like it enough to finish it off. However, they assured me that it was the best pizza they had ever had and that it was just so much more filling that they just couldn’t eat any more. They ate the leftovers for breakfast the next morning. Two meals from one homemade pizza! And, when I figured out how much it cost, it turned out to be less than 1/2 of the takeout price – that’s good value!

We don't order take out pizza anymore as pizza is just so easy to make and so much better than takeout. So here’s the pizza dough recipe that I have made at least once a week since that first time with a couple of suggestions for some new and interesting toppings that my sons have learned to appreciate as their tastes have become more sophisticated. I had a fabulous Leek Pizza in Houston when a friend took me to a great restaurant called Tiny Boxwood. So, I promptly came home and tried to recreate it. The Leek, Ham and Goat Cheese topping is now my sons' new favorite!

In small bowl, mix sugar and yeast. Add warm water and stir. Wait a few minutes until you see the yeast proofing (getting bubbly). Then put in flour and salt into food processor and turn on. Pour yeast mixture through the tube and mix until a ball just starts coming together. Add in the olive oil and keep mixing until the ball is formed (add another tablespoon of oil if necessary) and continue to process for about 1 minute. Remove dough from the food processor and place in an oiled bowl. Put in a warm place (I put it in the microwave with the door partially open so that the light stays on). Let rise for about ½ hour.

Melt butter in large skillet, add leeks and stir until softened, about 3 minutes. Add garlic and sauté for about 2 minutes more. Add in chicken broth and cook until the liquid is almost gone.Preheat oven to 425 degrees. Oil jelly roll pan (1/2 sheet pan or round pizza pan)and then spread dough onto the pan making sure to push up at the sides and corners. Spread leek mixture all over dough, then sprinkle on ham and goat cheese evenly. Drizzle Balsamic Vinegar across the top and sprinkle with sea salt and pepper. Place in the hot oven and cook for 15 - 20 minutes or until crust is browned - be sure to check underneath by lifting up with a spatula. Cut with a pizza cutter as it is very easy to get burned using a knife. Sprinkle with red pepper flakes when serving 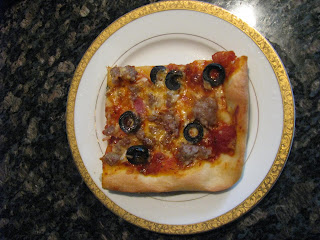 Pizza is rustic and casual food so it has an inherent earthiness about it. For the Leek, Ham and Goat Cheese Pizza - the leeks are sautéed until soft and sweet so they become earthy too. The wheat and yeast dough belongs to the wood element and so does the balsamic vinegar. The garlic belongs to the metal element as does the tangy goat cheese. Ham is salty pork, which is the water element and the extra sea salt adds to this element. The only element missing is the fire element, so adding the red pepper flakes when serving balances the pizza and makes this pizza a special taste treat!For the traditional pizza - the dough is again the wood element, tomato sauce is fire, the white cheese - particularly the parmesan as it is savory and full of umami - is the metal element, the meat is pork, which is the water element, the olives are partly water because they are black but also fiery because they are bitter. The mushrooms are earthy and the addition of onions and garlic bring in even more metal. Can you see that this kind of pizza can be a pretty balanced fast food? It's delicious too!